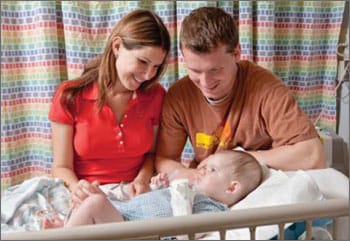 At twenty weeks pregnant, Dayna Landry and her husband, Clark, were eagerly anticipating learning the sex of their unborn baby. Just a few minutes into the ultrasound exam, the doctor paused. Something was wrong—very wrong.

The doctor immediately referred the West Los Angeles couple to a perinatologist, a high-risk pregnancy specialist, who confirmed the diagnosis: The baby boy had a congenital cystic adenomatoid malformation (CCAM), a mass of abnormal lung tissue.

Although many CCAMs can be successfully removed after birth, this mass was as big as the baby’s head and had pushed his heart to one side. He had virtually no chance of surviving.

The Landrys were devastated. The doctor offered to refer them to the Institute for Maternal-Fetal Health, a collaboration between Children's Hospital Los Angeles and the University of Southern California. A few hours later, the family received a phone call. It was Terri Maitino, RN, nurse-coordinator for the Institute’s Fetal Therapy Program.

“Terri was so caring and kind,” says Dayna. “It was like a ray of hope.”

The next day, the Landrys were seen by Ramen Chmait, MD, the Institute’s director of Fetal Therapy. Dr. Chmait confirmed the seriousness of the situation. But he also offered a novel treatment. With a tiny incision, he could insert a strawlike scope into the womb and inject a special solution into the mass to shrink it, releasing the pressure on the heart. If all went well, the baby could develop normally in utero, and the remaining mass could be removed after birth.

“I knew right away I wanted to try it,” Dayna says. “We wanted to give our baby any chance we could.”

The minimally invasive procedure took just half an hour. Four weeks later, it had worked: The mass was dramatically smaller. But would the baby have enough lung function to breathe?

The answer came Nov. 6, 2009. The Institute had arranged for the birth to take place at Hollywood Presbyterian Medical Center, next door to Children's Hospital, in case the baby needed immediate care.

In a delivery room filled with doctors, including Dr. Chmait, baby Cole arrived with a loud, healthy scream — and weighed in at nearly 9 pounds.

As a precaution, he spent a week in the Newborn and Infant Critical Care Unit at Children's Hospital. Six months later, the remaining mass was successfully removed at our hospital by pediatric surgeon Tracy Grikscheit, MD. “It’s clear that Cole has adequate lung capacity to live a full and healthy life,” she says.

Now 7 months old, Cole is a happy, smiling baby who’s adored by his parents and his big sister, 3-year-old Sophie. “He’s a sweet, beautiful, healthy baby,” says his mother. “Words can’t express how grateful we are.”