More than 30 surgeries to correct his chest, rib and spinal abnormalities have not been able to diminish the courage of Alex Ito.

An uneventful pregnancy left Wendy and John Ito blindsided by what ensued after Wendy gave birth in July 1999: Their new son, Alex, was diagnosed with VACTERL syndrome, an acronym for a set of associated birth defects. To establish the diagnosis, a patient must have at least three of the seven abnormalities; Alex was born with four of them. He had the V for vertebral anomalies—causing spinal and rib cage malformation; the C for cardiac—he suffered from tetralogy of Fallot, a group of irregularities that impair heart function; the R for renal—he had only one functioning kidney; and the L for limb—he was born with a hand deformity.

The vertebral defects were the most dangerous. Alex’s vertebrae did not develop normally during gestation, resulting in malformed ribs and extreme curvature of his spine. At 12 months old, the spine curved to almost 90 degrees. If untreated, it would endanger his growing internal organs and put his heart and lungs at grave risk.

To stop the advance of the scoliosis, the standard treatment at the time was fusing the spine, but that would have also cut down Alex’s growth while not addressing his ribs. At age 2, Alex underwent what a groundbreaking new treatment: the vertical expandable prosthetic titanium rib (VEPTR) procedure, under the hand of Children’s Hospital Los Angeles orthopedic surgeon David Skaggs, MD. Skaggs, now head of CHLA’s Children’s Orthopaedic Center, had been specially trained in the procedure, which implants titanium rods into a child’s chest cavity, hooking directly onto the rib cage or pelvis. The rods separate the ribs while also straightening the spine, allowing the chest to expand as the child grows and creating space for the lungs to function.

“With any other treatment,” Skaggs says, “Alex would eventually have been a man with the chest size and lung capacity of a 2-year-old.”

Alex was the first child in California to undergo the procedure, fitted by Skaggs with three titanium ribs on his left side. Benefits were immediate and profound. Alex grew over 2 inches as a result of the surgery and his lung function was much improved. 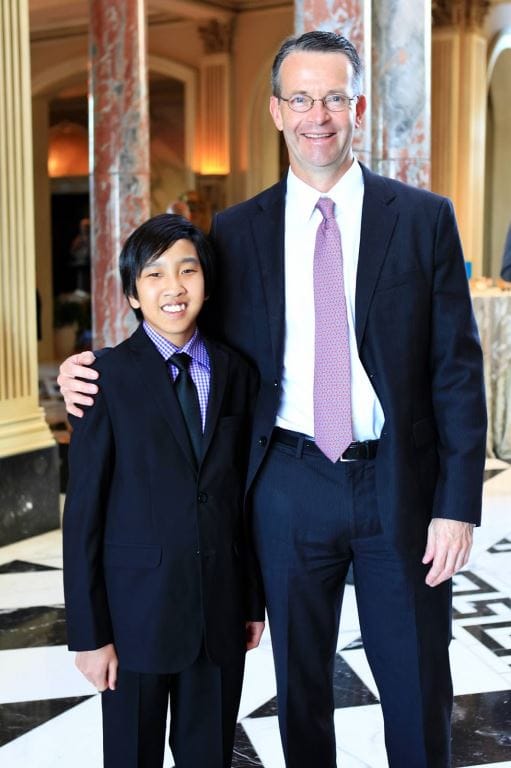 For the next decade he returned to CHLA every six to eight months to have the titanium ribs lengthened by Skaggs, to keep up with his growing body. But the devices could not correct the irregular growth of Alex’s spine, which worsened over time. With Alex at age 12, the decision was made that it was time to fuse the spine, to hold it in place and prevent any further “bad growth,” as Skaggs says. He explains that getting Alex to 12 years old with the prosthetic ribs was a triumph of sorts, as it meant Alex had reached a point where his chest was large enough to support his respiration as an adult.

“If you can get the patient up to about age 10 or 11,” Skaggs says, “then the spine is big enough that we can fuse it in that position and stop it from getting any worse, and he’ll have sufficient pulmonary function to live the rest of his life.”

Fusing the spine would limit Alex’s growth, but the titanium ribs had achieved their purpose.

“We had visions that he would be expanded until he was 18 and have a fully normal spine,” Wendy says. “But the reality is his spine is not normal. It doesn’t have normal growth plates, so it’s never going to grow normally. Those ribs and those expanding devices for his chest and spine were the only way that he was ever going to grow within any possibility of a normal growth.”

Now 15, Alex is small—just shy of 5 feet—but he is able to do virtually whatever he wishes. Fortunately, that hasn’t included anything too harrowing.

“The only thing he’s restricted from is full-contact sports,” Wendy says. “He never wanted to be a football player, thank god. He can swim. He can dive. He can jump off rocks. He rides a skateboard. He pretty much can do everything he wants to do.”

However, the effects of Alex’s birth defects have to continue to be addressed. Last year, trouble arose with his heart; the right ventricle had dilated as a result of weaknesses related to tetralogy of Fallot. Though he had good function and no outward signs of strain, a scan at his annual checkup with CHLA cardiologist Pierre Wong, MD, showed that his right ventricle had grown to twice the size of his left. Wong advised that it was time to put in a new pulmonary valve to prevent the enlargement from advancing any further. 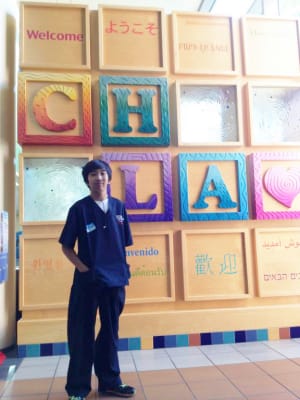 The hope was that Alex could receive a Melody Transcatheter Pulmonary Valve, which is delivered through a catheter and requires only a small incision. But the right ventricle’s outflow tract—which carries blood out from the ventricle to the pulmonary artery—had become too large to safely fit the Melody valve.

Instead, the valve would have to be repaired through traditional open-heart surgery, to be performed by Vaughn Starnes, MD, chief of CHLA’s Division of Cardiothoracic Surgery. The procedure carries more risk, partly because of all the metal Alex has in him as well as the scar tissue from his extensive surgical history.

However, Starnes told Wendy that with proper precaution and planning, accounting for Alex’s history, he expects the surgery to be completed successfully. “He was so confident that he could do this, and it made sense,” Wendy says. “So we feel good about it.”

In the meantime, Alex goes about his regular business, adding to his already crowded portfolio of extracurricular pursuits. In addition to being a member of his high school’s robotics club and fencing team and playing the trumpet in the school’s marching band, he’s taken up taiko—Japanese drumming—prompted by his growing interest in his Japanese heritage. He also participates in CHLA’s Junior Ambassadors, a program for kids who wish to help with the hospital’s fundraising efforts.

What got Starnes’ attention was Alex’s trumpet playing, which, one could say, was music to his ears. He saw it as an indication that Alex’s lungs were strong enough to get through heart surgery. “Initially, when he saw Alex’s body and X-rays he was worried,” Wendy says. “You imagine with all that hardware in him that he’d have really weak lungs.”

In fact, the opposite is the case. All of Alex’s trumpet playing, which began in middle school, has developed his lung strength so much so, Wendy says, it has helped to protect him from many of the complications that are often tied to early onset scoliosis.

With his heart surgery approaching, Alex says he initially was saddened to learn he had to have another procedure. “I was thinking, ‘Ah, I’m going to miss so much.’ School stuff, doing things with friends.”

But the disappointment quickly gave way to resolve. Scheduled for early April, the surgery will be No. 32 for Alex. He’s approaching it with the same spirit that has seen him through the first 31.

“I just came to realize I have to accept it and go with it,” he says, demonstrating that even at just 5 feet, it’s possible to stand taller than anyone can measure.

How You Can Help
Consider making a donation to Children’s Hospital Los Angeles and help treat kids just like Alex. Visit CHLA.org/Donate.