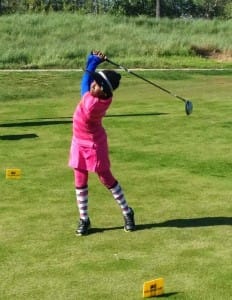 Immediately after watching The Short Game, a documentary about the best 7-year-old golfers descending on the world-famous Pinehurst Golf course to determine the next world champion, Marley Franklin declared, “I’m going to make it to Pinehurst one day.”

In just two short years, the now 10-year-old has won six out of seven tournaments, was named 2014’s Player of the Year in the Los Angeles Tour of the U.S. Kids Golf Organization and received an invitation to play in the U.S. Kids Golf World Championship in Pinehurst, NC. “Marley has always had a competitive spirit; She always wants to win,” says Marley’s mother, Tirzah Franklin.

However, little do people know that most of her accomplishments are not due to her competitive nature, but her four-year-old sister, Maya.

Coping with the pain 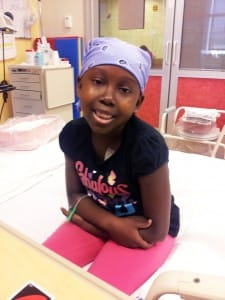 Marley was diagnosed with sickle cell anemia at birth—a painful and hereditary condition in which the red blood cells are abnormally shaped like a crescent. The sickle cells are stiff and sticky and tend to block the flow of blood and oxygen in blood vessels of the limbs and organs, causing pain and organ damage. “I used to have headaches that wouldn’t be like normal headaches,” said Marley. Tirzah helped explain, “Marley would just scream from the discomfort.”

In September 2005, Marley Franklin and her family moved from a Dallas hotel, their temporary residence after Hurricane Katrina, to Los Angeles. It was here where they found the Children's Center for Cancer and Blood Diseases and Neena Kapoor, MD, director of the Blood and Marrow Transplantation Program at Children’s Hospital Los Angeles to help Marley manage her sickle cell pain. By 2010, Marley would receive weekly blood transfusions for the next one and a half years. “Children’s Hospital provided excellent, thorough care for Marley,” says Tirzah. “I have nothing but good things to say about Children’s Hospital Los Angeles.” 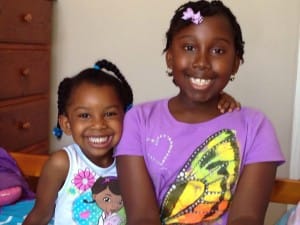 However, in 2011, Marley’s condition was not making any progress. To improve her health, the best medical course of action would be to undergo a bone marrow transplant. Fortunately, Maya was born just the year before. After intensive testing, Maya proved to be almost an exact match for Marley and became her sister’s life-saving donor at just the age of one. “Bone marrow is a wonderful organ,” says Kapoor. “It is like wild grass; you remove some if it and before you know, it is growing again. There is no permanent loss for the donor, but they are giving a chance of life for the potential recipient.”

A chance at life seems precisely true as Marley would have never been able to refine her skills in a sport like golf, let alone participate, if it wasn’t for her bone marrow donor. “Golf helped her get outside after a year of recovering from her transplant,” says Marley’s father, Jamar Franklin. “It helped her get her strength back in an easier and less intrusive way. It has also allowed our family to focus on something other than her disease.”

Marley currently has no medical issues and Kapoor states that she is cured of sickle cell anemia and all associated problems related with this disease. Now, Marley can focus on leading an accomplished life in golf. “I am never giving up golf,” exclaims Marley. “I hope to get a scholarship in golf when I go to college and become a professional golfer.”

Just recently, Marley attended the U.S. Kids Golf World Championship at Pinehurst Golf course in North Carolina and placed 58th out of 85 in the Girls Age 10 Division. Marley practices up to two to three times a week with her father and coach. Her favorite player is Bubba Watson, because he is a leftie like her.