Meet Alex Dale: Writer and Creator of 'Up In Arms' and Jr. Ambassador of Children's Hospital Los Angeles

The teenage mastermind behind the creation of Up In Arms was diagnosed with Scheuermann Kyphosis, a spinal deformity in August 2010 and had to wear a back brace for nine months, which did not cure him. In July 2011, David Skaggs, MD, Chief, Children's Orthopaedic Center at Children’s Hospital Los Angeles, performed a spinal fusion on Alex to correct the curvature of his spine. 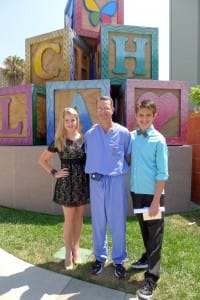 There is currently inadequate information and research about Scheuermann Kyphosis. Funds are being collected to explore the disorder to provide more treatment options for children so that they do not have to live with the effects of kyphosis into adulthood.

In 2011, Alex launched his web series, Up In Arms, to raise money for Children’s Hospital Los Angeles to help research treatment for children who are diagnosed with Scheuermann Kyphosis. It is described as a cross between The Daily Show and Saturday Night Live and is written in a humorous fashion, focused on social issues that teens are dealing with and to ultimately lend support for others who are struggling with spinal deformity.

“I want to assist other people who are suffering from Scheuermann Kyphosis and raise funds to help research alternate methods for treatment,” says Alex. Viewers can give back to the cause through the Up In Arms website, where 100% of the proceeds go directly to Children’s Hospital Los Angeles.

Alex, a Glendale, Calif. resident, made the check presentation earlier this week to Dr. Skaggs at Children’s Hospital Los Angeles and was joined by actress Madison Curtis, another Junior Ambassador who resides in West Toluca Lake
.