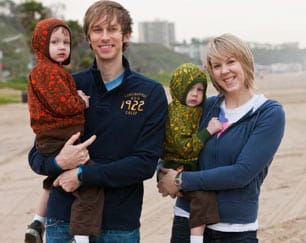 More than half of the patients treated by the Hematopoietic Stem Cell Transplantation (HSCT) Program at Children’s Hospital Los Angeles are under five-years-old, including the world’s youngest HSCT patient, who received a transplant at three weeks of age.

Since 1983, more than 1,300 children have received hematopoietic stem cell transplants at the hospital, which include bone marrow, peripheral blood stem cell and cord blood transplants. In fact, Children’s Hospital Los Angeles is responsible for half of all pediatric bone marrow transplants performed in Los Angeles County.

This level of experience is invaluable — especially when dealing with such vulnerable patients. “Younger children have special needs that adults don’t,” explains Ami J. Shah, MD, acting division head and clinical director of outpatient services for the Division of Bone Marrow Transplant/Research Immunology.

Babies and infants are more susceptible than adults to toxicities from chemotherapy because their organs, such as the liver, aren’t fully developed. Certain drugs aren’t given until children are at least two months old; even then, the HSCT team closely monitors liver function, brain development and more —and continues to follow these children for years.

All of which was reassuring news to parents, Carrie and Xander. Like any new parents, the were overjoyed with the birth of their first children, twin boys Keane and Ethan. Although born a month early, the boys were soon topping the charts in height and weight.

Suddenly, at age four months, Ethan began having high fevers, and his stomach became extremely swollen. The symptoms subsided after a week in a local hospital, but quickly returned.

His parents brought him to Children’s Hospital Los Angeles in 2007, where doctors gave them a double dose of grim news: Ethan had a genetic blood disorder that, if untreated, is fatal in the first two years of life. And his identical twin, Keane, had the same disease. “It was the absolute worst-case scenario,” says Carrie.

Within two months, Keane started showing similar symptoms. The boys’ only hope for a cure: a bone marrow transplant.

An HSCT transplant can be a lifesaver for children with leukemia and lymphoma, as well as for children born with severe combined immunodeficiency syndrome or rare genetic disorders. Recent advances are enabling the transplants to also be used in certain cases of previously incurable diseases such as sickle cell disease, notes Dr. Shah, professor of clinical pediatrics at the Keck School of Medicine of the University of Southern California.

The twins had an inherited form of hemophagocytic lymphohistiocytosis (HLH), a rare syndrome in which the body over-produces certain white blood cells, which then build up in the liver, spleen and other organs and destroy normal blood cells.

The family began holding bone marrow registration drives at their church, at other local churches and at Warner Bros. Studios, where a friend worked. Meanwhile, both babies endured weekly chemotherapy treatments, took 20 daily medications and were frequently hospitalized with fevers and infections.

“It was really hard,” their mother recalls. "We were just praying for a donor.”

Their prayers were answered in August 2007, when a donor was found through a German registry. Because the boys were so young, they could split the marrow from the donor, an anonymous 34-year-old German woman. Before the transplant, the twins received intense chemotherapy at Children’s Hospital to essentially wipe out their immune systems.

Just past midnight on Sept. 22, 2007, the vital marrow arrived on an overseas flight and was given to the boys. Both responded well, but it was an uphill battle. Ethan took longer to recover because his disease had spread further than Keane’s, and he suffered more post-transplant complications. The boys couldn’t even see each other, staying in separate isolation rooms in the HSCT unit.

Keane came home just before Christmas. A month later, Ethan followed. Today, more than two years later, the twins are thriving three-year-olds. Keane loves every sport imaginable and “speaks like a six-year-old,” Carrie says. While Ethan is still undergoing speech therapy, he loves to run, jump and play with his brother. Both boys are tapering off their immunosuppressant medications and will eventually only take one daily pill — a thyroid medicine.

The family remains active in encouraging people to register as bone marrow donors — a simple process that requires only a cheek swab for testing. “One woman’s generosity saved both our children,” Xander explains. “We’re so grateful to her, and to Children’s Hospital. We want to help other families have a happy ending, too.”