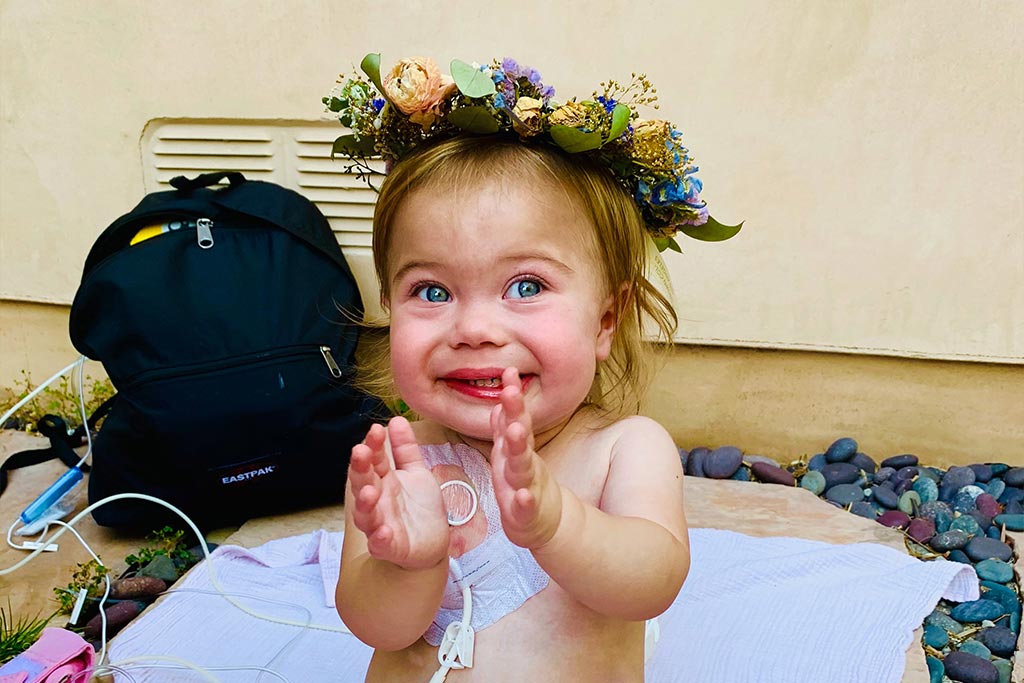 Diagnosed with acute liver failure and her health rapidly deteriorating, it seemed like 11-month-old Lennon would need a miracle to survive. Thanks to a team of specialists at Children’s Hospital Los Angeles, she just celebrated her third birthday.

On the evening of Jan. 15, 2020, Althea quietly sat at her baby’s bedside in the hospital, unable to hold or touch her because of the tubes and IV lines that were keeping the 11-month-old alive.

“You don’t need to stay for us. If it’s your time to go, it’s OK. No one is going to be mad. Just please know I love you,” she whispered to her daughter before falling asleep.

It was a goodbye Althea wasn’t sure she had to do. Maybe Lennon would get better the next day. But what if she didn’t?

A few hours later, in the middle of the night, Althea felt a soft tap on her shoulder.

It was one of Lennon’s nurses in the Pediatric Intensive Care Unit (PICU) at Children’s Hospital Los Angeles, holding a phone. On the other end of the line was a transplant coordinator delivering the news everyone had been hoping for all week. A liver had become available for Lennon, and a helicopter was on the way to pick it up.

“I remember crying through the joy, and then suddenly getting this pit in my stomach,” says Althea. “I was so, so happy that my child was going to make it, but I knew that meant there was another mom out there who had just lost her baby.” 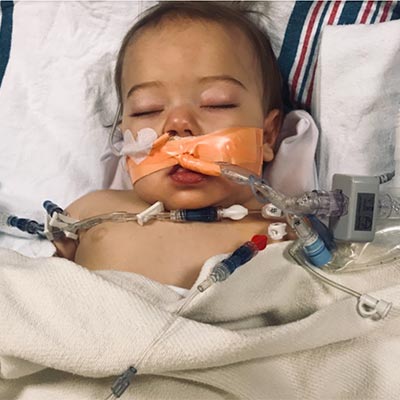 Lennon recovers in the PICU two days after undergoing a lifesaving liver transplant.

Acute liver failure in children is a rare but life-threatening condition. It can progress rapidly—causing the organ to shut down over the course of a few weeks or even days—and be fatal.

“The best action plan for patients with liver failure is to work to be ahead of the game,” says George Yanni, MD, Attending Physician and Director of the Transplant Hepatology Fellowship Program at Children’s Hospital Los Angeles. “For us, that means completing an urgent assessment to see if there are any signs that the organ is trying to recover on its own. If we don’t have that evidence, we have to proceed quickly because time is very crucial.”

When Lennon was admitted to Children’s Hospital, her liver function was in sharp decline, and the disease was starting to affect other parts of her body, from her brain to the kidneys. After being evaluated by a team of experts from the Division of Gastroenterology, Hepatology and Nutrition, and the Division of Abdominal Organ Transplantation, Lennon was added to the transplant list as “Status 1A”—the highest ranking possible.

The classification signified that if she didn’t receive a transplant within a week, the probability of death would be over 90%.

Althea walked out of that meeting with the liver transplant team and started to contact her family in the Midwest.

“It was probably the scariest, most cryptic text: ‘It’s not OK. You need to come now,’” she says. “Basically, I was telling people to fly out so they could say see Lennon one last time.” 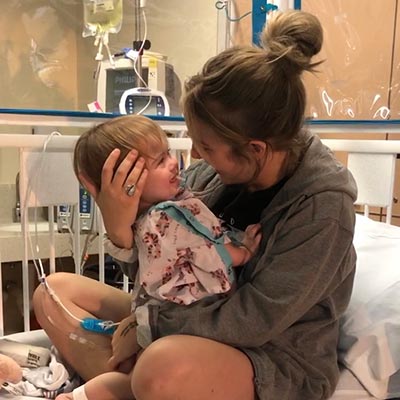 “I feel that everyone at the hospital genuinely cares for my child as if Lennon was their own,” says Althea.

Just seven days earlier, Lennon had been her usual self: a happy and energetic baby who was about to celebrate her first birthday. Althea had flown to Los Angeles from Chicago to visit friends when Lennon woke up on the last day of their trip and began vomiting a substance that looked like bile. Althea rushed to an urgent care center. Within seconds of seeing Lennon, the medical staff told Althea to go straight to Children’s Hospital Los Angeles.

In the Emergency Department (ED) at Children’s Hospital, Lennon had a seizure that lasted seven minutes.

“It felt like every doctor, every nurse, every tech was in our room trying to help her,” recalls Althea. “I ran out and the only thing I remember was sitting on the floor in the hallway and sobbing. I just had that mom feeling of knowing something was really, really wrong.”

When the ED team believes a patient needs to be hospitalized in the PICU, they notify the on-call critical care consultant who comes to the ED to assess whether an admission is necessary. After lab results showed Lennon’s liver enzymes and ammonia levels were extremely high, Meredith Winter, MD, told Althea they needed to get Lennon transferred to the PICU right away. She was in acute liver failure.

Over the next 24 hours, Lennon’s health worsened and her other organs began to fail. She required a breathing tube and ventilator, dialysis for her kidneys and vasopressors to support her low blood pressure. Acid had begun to accumulate in Lennon’s tiny body, and doctors feared toxins had traveled to her brain. Plus, without the liver doing another one of its other crucial responsibilities—producing clotting factors—she was at risk for life-threatening bleeding.

The PICU team had to get Lennon down to the CT scanner, but getting her there was challenging. She had multiple IV lines, dialysis would need to be stopped, and the ventilator that was breathing for her would be changed to a portable one—and there was a chance it could become disconnected on the way. Even the act of pushing a baby so medically fragile down the hall could be dangerous and cause cardiovascular collapse.

“It was an extremely tenuous time for her, and I think that at many times during that night she was at risk of dying,” says Dr. Winter, who was in the second year of her critical care fellowship at the time. “Between the dialysis, the worsening neurological status, the concern for bleeding, the hemodynamic failure and the kidney failure all happening at the same time, it was dire.

“I feel like I remember every second of it,” she adds. “I will never forget Lennon for the rest of my career.”

Trying to pinpoint the problem 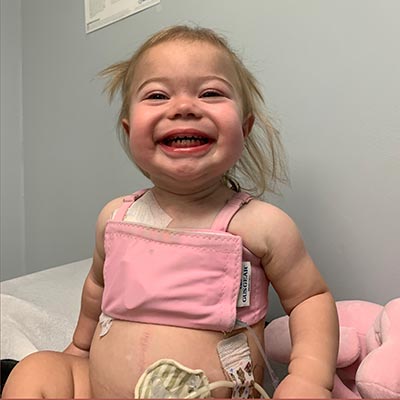 Lennon at her one-year follow-up appointment

The last—and only—time Lennon had ever visited a hospital was when she was 8 months old. Back home in Chicago, she had been diagnosed with tuberous sclerosis, a neurological disorder that causes noncancerous growths to form on organs. Lennon didn’t have any tumors but did suffer from seizures, a common symptom associated with this genetic condition. With daily medication, though, she had been able to lead a relatively normal life.

Tuberous sclerosis doesn’t lead to liver failure; however, anti-seizure drugs have been known to cause liver damage. Lennon’s care team, which included experts from the Neurological Institute at Children’s Hospital, wanted to see if there was a connection between her liver failure and the medication she had been prescribed, or if there were any other factors that could explain the loss of liver function.

“From our complete workup, which covered genetics, gastroenterology, hepatology and transplant, there was no clear indicator as to what was causing the failure,” says Vijay Vishwanath, MD, PhD, a child neurologist who specializes in neurocutaneous disorders such as tuberous sclerosis. “But because there isn’t a lot of published literature on the effects of the particular drug she was taking in liver transplant patients, we opted to stop the medication in preparation for the transplant.”

After that harrowing night in the PICU, Lennon’s health started to stabilize over the next 48 hours. Then came news about the transplant.

On Jan. 16, 2020, Lennon entered the operating room, where the team of transplant surgeons, led by Yuri Genyk, MD, Chief of the Division of Abdominal Organ Transplantation at Children’s Hospital Los Angeles, performed the six hour-long procedure. Lennon’s damaged liver was removed and replaced with the donor organ. Then Dr. Genyk ensured all the connections were working properly, including the blood supply and draining channels, before sending her into recovery.

“The fact that she made it to the transplant after everything she went through is an absolute miracle,” says Althea.

Although Lennon had some complications after the surgery, she is now doing well and doctors say her prognosis is good. She returns to Children’s Hospital Los Angeles every few months so that Dr. Yanni can monitor her new liver and weight. Meanwhile, Dr. Vishwanath, Lennon’s neurologist, has since prescribed a different medication for her seizures, one that metabolizes outside the liver to avoid any strain on the organ.

Althea has since decided to relocate to Los Angeles, which has allowed her to be closer to the medical care her daughter needs—and also to the nurses and doctors who have become some of her closest friends.

One bond that has remained especially strong is with Lennon’s PICU care team.

“The intensive care unit is definitely a hard place to be. The highs are really high and the lows are really low,” says Sarah Underkofler, RN, one of Lennon’s primary critical care nurses. “But there’s a special connection that happens after being with a patient family who is going through the toughest moments of their lives and walking that line with them.

“We started out as strangers,” she says, “but ended up as family.” 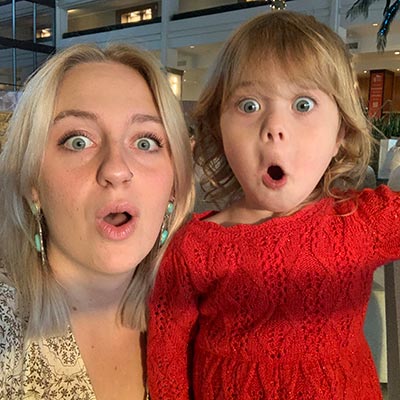 During the darkest moments of Lennon’s hospitalization, Althea, a singer and songwriter, turned to something that has always comforted her: music. She wrote two songs: a ballad about Los Angeles being a painful place and another tune called “Saturday Morning” about the everyday things she longed to do with Lennon—make her pancakes, put shoes on her feet, rock her to sleep.

“I would never take a day for granted/I gotta hand it to you/Not a day, a minute or a second/That’s what happened/When I almost lost you,” she wrote for one part of the lyrics.

“Saturday Morning” ended up being the song Althea chose to perform when she was approached to audition for Season 19 of American Idol. It earned her one of the show’s coveted “tickets to Hollywood,” where she would compete for several weeks, all while balancing Lennon’s care.

When the contestants weren’t filming, Althea would use her breaks to take calls from doctors at Children’s Hospital, text her dad, who had flown out to help watch Lennon, how to use different medical equipment, or FaceTime with Lennon. After the day’s production had wrapped, Althea would jump in her car and head straight to the hospital.

“Being on ‘Idol’ is already so intense and takes a lot out of you,” says Althea, who finished in the Top 64 of the show. “But doing that with everything else that was going on, I don’t know if I’ve ever been that tired in my life.”

Dr. Yanni is hopeful that Lennon soon will be able to transition from appointments every two to three months to annual checkups, though it will be bittersweet for him and the entire liver transplant team when that happens.

“We have been so happy to be part of her care at Children’s Hospital,” says Dr. Yanni. “They are such a wonderful family, and Lennon is a little angel. It always gives us joy when we see her in the clinic.”

For Althea, Children’s Hospital Los Angeles forever will be her and Lennon’s second home.

“Coming to a hospital can be terrifying, especially because I didn’t know that many people in L.A. at the time,” she says. “But now, whenever we visit, we can’t walk through the halls without recognizing someone and giving them a hug.

“For the staff, this isn’t just a job,” she adds. “I feel that everyone at the hospital genuinely cares for my child as if Lennon was their own. And that is really incredible.”