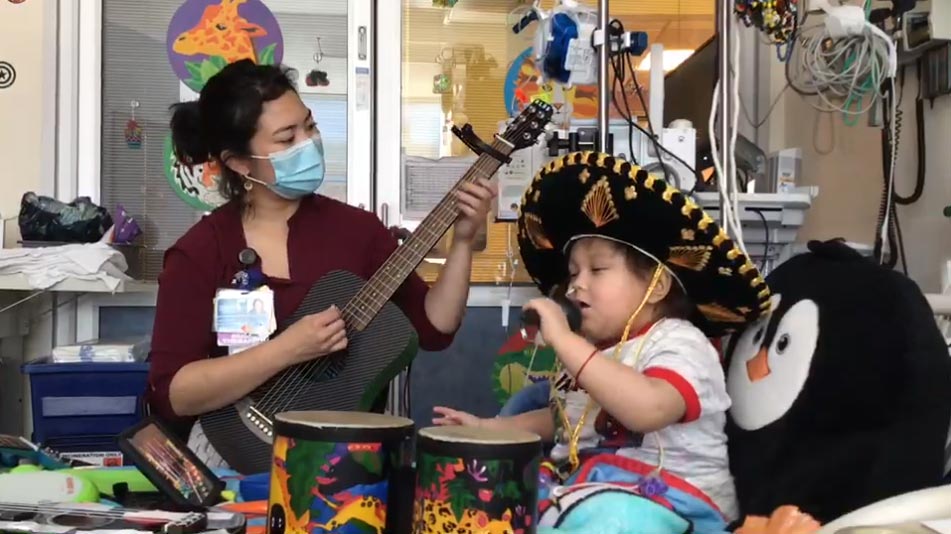 A love of mariachi helps a young patient battle a rare genetic condition.

He wears a large black sombrero with festive gold braiding, and the maraca in his hand doubles as his microphone. A guitarist strums and sings beside him as he tilts back his head and belts out the chorus:

The tune is “Cielito Lindo,” a traditional Mexican folk song, and the performer is 6-year-old Adriano—a mariachi star-in-the-making better known to his many fans as simply “Nano.” And the concert venue? Nano’s bedside in the Bone Marrow Transplant (BMT) Unit at Children’s Hospital Los Angeles.

The BMT Unit has been the site of countless Nano concerts, thanks in large part to that guitarist singing along with him—Music Therapist Hana Cho, MT-BC.

“Hana is one reason he stayed alive in the hospital,” says Nano’s mom, Eliana. “She brought him something he loves: music. He lives for music. That’s just who he is.”

‘This can’t be happening’ 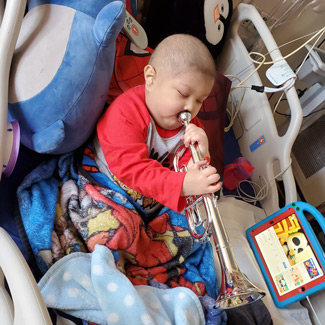 Nano’s love affair with song—and especially mariachi—started at an even younger age. When he was a baby, his mom would soothe his tears by singing the chorus to “Cielito Lindo” (Pretty Darling).

“Every time he would cry, I would sing that to him: ‘Ay, yai, yai-yai, canta y no llores—sing and don’t cry,’” she translates. “Be happy! And that became his favorite song.”

The song has become a sort of anthem for Nano through the months he’s had to spend at Children’s Hospital Los Angeles. He was born with a rare genetic condition called Fanconi anemia, where mutations in certain genes slow the normal daily process of DNA repair in cells. This fragile DNA leads to bone marrow failure and other problems.

He was 15 months old when he was diagnosed at Children’s Hospital Los Angeles. “When the doctors told us, it just broke me,” says Eliana. “I was like, ‘This can’t be happening.’”

Some Fanconi anemia patients can live for years, even decades, before their bone marrow fails. But by the time Nano was 4, his blood cell counts were dropping too low, and random bruises began popping up on his body.

“As Nano grew, his marrow function worsened, and it got to the point where he was going to need blood transfusions,” explains Michael Pulsipher, MD, a hematologist and Head of Transplantation and Cellular Therapy in the Cancer and Blood Disease Institute at CHLA, and an expert in Fanconi anemia. “He really needed a bone marrow transplant.”

Bone marrow transplants in Fanconi anemia patients are highly specialized. Because of patients’ fragile DNA, doctors must use different and less-intense treatments, including lower-dose chemotherapy medicines.

Unfortunately, none of Nano’s family members—including his three siblings—were a suitable match. A search among unrelated donors also came up empty. Nano’s best option was an umbilical cord blood transplant from one of several national registries that bank cord blood that’s donated after babies are born.

“Cord blood is very rich in bone marrow stem cells,” Dr. Pulsipher says. “It allows us to do a mismatched bone marrow transplant that we couldn’t otherwise do.” 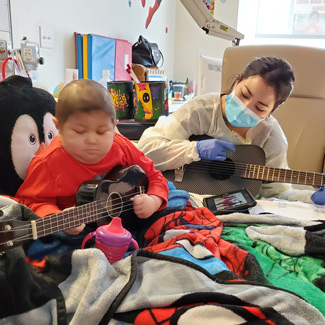 Nano's transplant went well, but afterward, he developed graft-versus-host disease of the gut and skin, a common complication. He’s also suffered recurring bouts of pneumatosis, a painful condition where air gets in the lining of the intestinal walls.

“It seemed every time he would heal from one thing, he would get sick with another,” Eliana says. “It was just back to back.”

But throughout all these ups and downs, there was a constant bright spot: music. From the start of his hospital stay, Nano was visited weekly by Cho, the music therapist.

“Music therapy is not music lessons,” Cho explains. “It’s using music to support a child’s emotional and developmental health and well-being during the stress of hospitalization. We disguise therapeutic techniques through music.”

For Nano, though, it was all fun. He already had a “guitar” (really a small ukulele), and he was in awe of the many instruments Cho brought with her, including bongo drums, maracas, tambourines and more. At first, he and Cho sang standard preschooler songs like “Wheels on the Bus.” But it wasn’t long before he had another request: “Cielito Lindo.”

“He was like, ‘You don’t know that one?’” Cho says with a laugh, remembering the surprise on his face. “I said, ‘Well, I guess I’d better learn it!’”

Nano has several other Latin-inspired favorites, too—including “Un Poco Loco” (A Little Crazy) and “El Latido de Mi Corazón” (The Beat of My Heart), both from the Disney movie “Coco.” Cho learned them all, and soon, they were a regular musical duo on the BMT Unit.

“Tell everybody I’m going to do my songs,” Nano would instruct his nurse. “I’m doing a concert.”

Then he’d get into one of his authentic miniature mariachi suits--like his cream-colored suit with the fine gold embroidery, or his blue-and-gold vaquero-style outfit. His dad had brought the suits home after a trip to Mexico, and it was a 10-minute process for him to get ready—donning pants, boots, belt, vest, jacket and one of his signature sombreros.

With the nurses gathered in the hallway, Nano would start with his grito—a high-pitched whooping shout that is a traditional part of mariachi. And then the singing—and sometimes traditional folklorico dancing—would begin.

One of Nano’s nurses even sketched a picture of him in one of his mariachi outfits. And this past fall, Nano joined other CHLA patients in decorating a pair of cleats from Major League Baseball star Justin Turner, who hit a home run while wearing them. 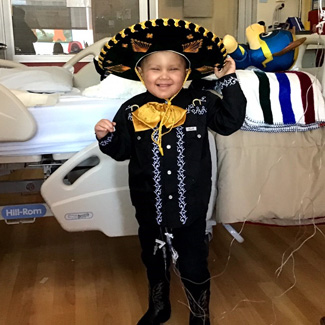 Nano’s journey has not been all song and dance. There have been plenty of tears.

One tough moment came before his bone marrow transplant, when he first had a central line placed in his chest. Then 4, he was sobbing inconsolably, crying out, “‘Mom! Dad! Why did you let them give me an owie? Why? Why?’”

Those cries would break the heart of any parent. But his dad, Marco, had a sudden inspiration. He popped in the movie “Iron Man” and explained to Nano that the medicines he would be getting in his chest would give him the same super powers as the hero on the screen.

Nano’s tears quickly subsided, and his new nickname was born. His aunt even made him an Instagram page: “Iron Boy: My Road to Recovery.”

There were other tough times, too—like all the days in the hospital when he felt too sick to sing or dance or even lift his head from his pillow. On those days, when Cho arrived for music therapy, she would ask if he wanted her to leave.

His answer was always the same: Stay.

Sitting at his bedside with her guitar, she would sing soft lullabies while he rested. “He loves Hana,” Eliana says. “The connection they have through music—it’s not a connection you could have with anyone else.”

As you might expect, on the day Nano went home from the hospital, there was plenty of song and celebration.

For the occasion, he wore his best mariachi suit and a bright, camel-gold sombrero. In the BMT Unit, he gave a farewell grito. Outside, he and his parents were greeted by a mariachi band, as they sang along to “Cielito Lindo.”

Then, finally, he was home. 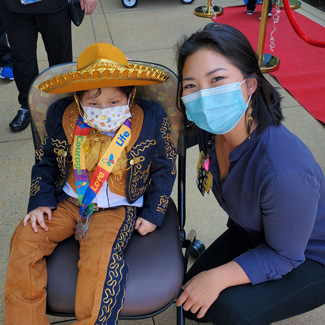 Whenever Nano sees a TV commercial for Children’s Hospital Los Angeles, he turns to Eliana and says, “That’s my hospital, Mom.”

“Yes, baby,” she replies. “That is your hospital.”

Nano’s family would also like to send a special thank you to the BMT nurses. “They’re our second family,” Eliana says.

Meanwhile, their journey continues. Recently, Nano was back in the hospital with another bout of pneumatosis, which quickly cleared. After slowly building up his tolerance to food again, he is now back home and doing well.

“Long-term, our hope is that we’ll be able to completely wean Nano off his immune suppression medicines, so he can live a more normal life,” Dr. Pulsipher says. “But we have to do that very slowly and carefully.”

Until then, “We’ve just got to stay strong and stay standing,” says his mom. “We’ve got to keep fighting.”

And of course, keep making music. And keep following those wise words from “Cielito Lindo”: Canta y no llores.

Learn more about the Artists Program