It wasn’t the standard goo-goo ga-ga or ma-ma da-da, but to his parents the strained, gravelly hehhh that Rio produced inside a patient room at Children’s Hospital Los Angeles was operatic.

Patrick and Holly had not heard Rio’s voice for nine months, since he emerged from Holly’s belly displaying the pained crying face that newborns make, but without sound.

Finding a blockage in Rio’s airway, doctors executed an emergency tracheostomy to deliver oxygen right into his windpipe.

At CHLA, otolaryngologist Christian Hochstim, MD, saw that Rio’s vocal cords were fused by a web of tissue, which stopped air from reaching his trachea and kept him from vocalizing.

When Rio reached 6 months, Dr. Hochstim went in surgically to split the vocal cords and implant a stent between them. He imported cartilage from Rio’s thyroid and wedged it into the space just below the vocal cords, which was also narrowed.

The vocal cords needed months to heal, and prove they would stay separated once the stent was removed. A speaking valve was placed onto the end of the tracheostomy, which allowed air into the tube when Rio inhaled, but closed when he breathed out, forcing exhalations to exit through the vocal cords, creating sound. The day the valve was introduced, Holly held Rio up to a mirror so he too could watch the debut of his own voice. 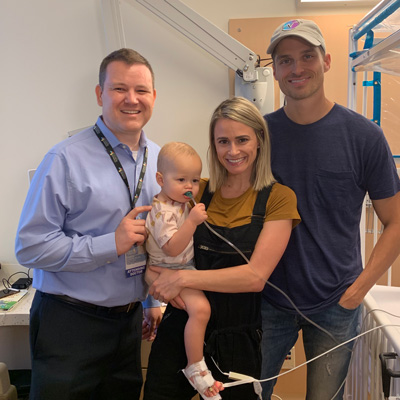 The valve was soon replaced with a hard cap that covered the tracheostomy entirely, a dress rehearsal to assure Dr. Hochstim the device was no longer necessary. After a successful sleep study showed that Rio breathed normally while asleep with the tracheostomy capped, Dr. Hochstim removed the tube in September.

“Just like that, it’s gone,” Patrick says. “We have all this extra time we didn’t have because we were doing around-the-clock care for him.”

Holly has moved forward in Facebook groups; where she once consulted Moms of Trach Babies, she now frequents the Naked Neck Club. Rio has progressed too, chattering like a toddler, because he can.