A Match That Was Homemade

Published on
May 8, 2020
Categories:
Patient Stories

In end-stage renal disease, Maverick needed a kidney transplant. When a donor didn't turn up fast enough, his parents decided to look in-house.

On a day when he had reason to be consumed with the moment at hand, Gary was looking forward, his eye on posterity as he addressed his 2-year-old son, Maverick.

“Your mom is doing a great thing for you right now,” he said into the camera, “and eventually the day is going to come that you’re on your own and you’re going to have to take care of this yourself. She’s giving you a big gift here. Make sure that you take care of it.”

‘Not every kid gets options’ 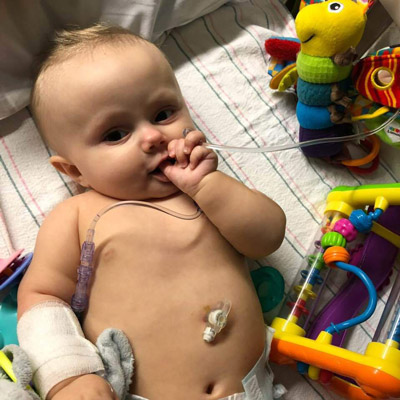 Maverick was born early, preterm at 34 weeks on May 31, 2017, having been carefully monitored for the prior six weeks after doctors found that his mother, Alex, had no amniotic fluid. But he passed every newborn screening test, and Alex returned home with him without any extra concern for his health.

Sent for evaluation at the local hospital, Maverick was diagnosed with renal cystic dysplasia. Both kidneys were undersized, covered in cysts and malfunctioning. He was in end-stage kidney disease, well outside the hospital’s capacity to treat. Alex brought him to Children’s Hospital Los Angeles, where a few months before his first birthday he was put on dialysis and his parents were told of the inevitability of a transplant.

He came under the care of nephrologist Rachel Lestz, MD, who found an additional complication. Maverick suffered from a posterior urethral valve, an unwanted piece of tissue that had created a blockage in the urethra and was causing urine to back up into the kidneys. That finding, Dr. Lestz says, squared with Alex’s lack of amniotic fluid during pregnancy, since urine is what produces amniotic fluid.

The problem valve was removed, but the kidney disease was not reversible and Maverick began receiving dialysis treatments at home. Peritoneal dialysis, the standard type of home dialysis, is an arduous daily task, requiring parents to take a two-week class on how to administer it so that the dialysis machine can do the work of the incapacitated kidneys.

“It’s a gut-wrenching feeling, you know,” Alex says. “Your kid needs an organ. But it made us feel so grateful that he had the option of dialysis. It wasn’t game over. There were options for us, and not every kid gets options.”

Plan B becomes Plan A 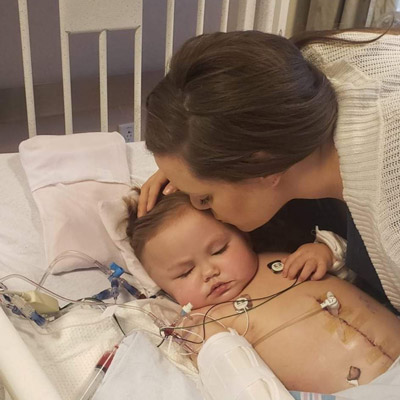 In November 2019, Maverick was listed for a kidney transplant, after a lengthy wait to allow him to grow to where his body could accommodate a new organ once a match came along.

“He was about 11.5 kilos [25 pounds] at the time of transplant,” CHLA transplant surgeon Kambiz Etesami, MD, says. “Once you start going below 10 kilos, the size of the kidney is an issue—whether or not you're going to be able to literally fit the kidney into the abdomen.”

“We didn't think they were large enough when we first met him,” says Dr. Etesami, Surgical Director of Kidney Transplantation at CHLA. “So we waited a period of time, and on repeat ultrasound and repeat imaging thought that the vessels were of adequate size after he had gained a bit of weight.”

But from whom would the new kidney come—and when?

That’s the agonizing question faced by all transplant patients and families. Alex and Gary decided on a fallback plan that would stabilize the answer: One of them would donate a kidney if a match from a deceased donor didn’t materialize. They scheduled the procedure for Jan. 22. If a donor kidney hadn’t been found by that date, they would use one of their own.

“If something came along, great, and if not, we were ready to go,” Alex says.

If available, a living donor is the more favorable option, Dr. Etesami explains. In addition to the more likely compatibility of an organ coming from inside the family, there is also a distinct advantage to being able to plan for the transplant surgery. “You can schedule it in the morning or in the middle of the day,” he says, “when you have a much broader support staff around you.”

Notice of a match from a deceased donor can come at random, often in the middle of the night, requiring the family to hustle the child to the hospital and into surgery, “because you want to take the kidney from the donor and put it in the recipient as fast as possible,” Dr. Etesami says. Any factor that lengthens the transit time between donation and transplantation cuts into the odds of the transplant’s durability.

Gary tested first. His wife had done her part in the delivery room. He wanted to even the investment.

“My wife gave birth to him,” he says. “I wanted to join him in his battle a bit more than I had. I would much rather be the person who falls on the sword than my wife, any day of the week.”

But his body wouldn’t allow it. One of his kidneys had some scarring and was not viable for transplant. That meant doctors would have to take his good kidney, which would leave Gary dependent on a compromised kidney. The health risk was too great.

Alex turned out to be an excellent match. Her kidney was the right size and had all the right characteristics. The family kept Maverick listed for a donor, hoping to keep Alex’s kidney essentially in reserve, to call on in the likelihood Maverick needs a second transplant down the road, in light of the life span of a donated kidney.

After two potential matches from deceased donors were found to be too big, the time came to install Alex as the donor. Plan B was promoted to Plan A.

As the surgery date neared, “I felt like I was on a roller-coaster and just waiting for it to drop,” Alex says. “There was no getting off.”

Actually, there was. Alex learned in discussions with her doctors at Keck Medicine of USC, where her half of the transplant would be done, that she could eject at any point. They told her that if she got cold feet, they would inform family members that on second look she wasn’t a match. “No one would have been the wiser kind of a thing,” she says. She declined the offer.

“Strapped on that roller-coaster, ready to go. He needed it and we were going to get it.” 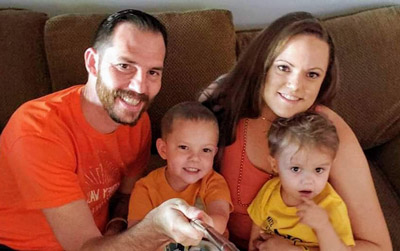 Alex would go first. After saying goodbye to her sleeping toddler at 5 a.m. in a patient room at CHLA, she headed down the 10 freeway over to Keck Hospital to be admitted.

Meanwhile, at CHLA, Dr. Etesami waited on deck. The sequence was meticulously timed. Alex’s surgery would begin at 7 a.m. and last about three hours. Her extracted kidney would then get transported to CHLA and arrive in Dr. Etesami’s operating room within an hour after it left USC, at which time he and his team would get to work on placing it in Maverick’s small, but-no-longer-too-small body.

It was all very practiced and clinical for Dr. Etesami, one of a remarkable rush of nine transplants he would perform in a two-week span. But it was not routine. Transplant never is, he says.

“In transplant there are always multiple lives,” he says. “It's never one life. You want to do well by your patient, but you also want to do right by the donor. You want their gift to be utilized as viably and successfully as possible. You don't want to waste a gift that's so precious.”

The surgery went off without incident. “The kidney fit right in and started working right away. It started making urine right there in the operating room.”

After a day’s recovery, Alex came to CHLA and saw a dramatic change in Maverick’s skin color. “I didn’t realize how pale he was before,” she says. “It didn’t even dawn on me to think that he was lifeless. After the surgery, it was like, wow, somebody colored him with a peach crayon. It was shocking. “

His face, though, looked unusually bloated. “He’s so puffy,” she said to Dr. Lestz.

“No, he’s hydrated,” Dr. Lestz answered, explaining to Alex that she was seeing the result of the new kidney working properly. “That’s how he’s supposed to look.”

The threat of Maverick’s body rejecting the kidney weighs on Alex, even if every weekly lab check says the kidney is functioning well. She mimics herself appealing to the nephrology nurse for good news.

“His numbers are good, right? They’re good? Every Monday is a nail-biter. You don’t really feel like you’re on the other side of it. I don’t think I’ll ever have that feeling of being out of the woods.”

The effect the new kidney has had on Maverick’s spirit and temperament are evident. His energy lasts all day, as opposed to dissipating the further out he got from the overnight dialysis treatment. He’s more social with his older brother, Landen, 4. He’s a smiling, laughing “little baby cannonball,” Alex says.

The prospects for him staying that way are better than they ever were.

“We used to say that the average kidney transplant lasts 10 years,” Dr. Lestz says, “but people in Pediatrics say we need to stop saying that because our transplants are lasting longer than that. The first kid transplanted here, that was over 40 years ago and he’s still walking around with his dad’s kidney.”

That gives Maverick plenty of time to pay forward the gift his mother gave him. Alex doesn’t want to hear too much about that, or about her devotion to her son. She lets out a genuine groan when she gets called supermom.

“I don’t like it,” she says. “I feel uncomfortable with it. You do what you have to for your kids. I don’t need to be put on a pedestal for it. I don’t feel any need to put super in front of anything. I’m just a mom.”