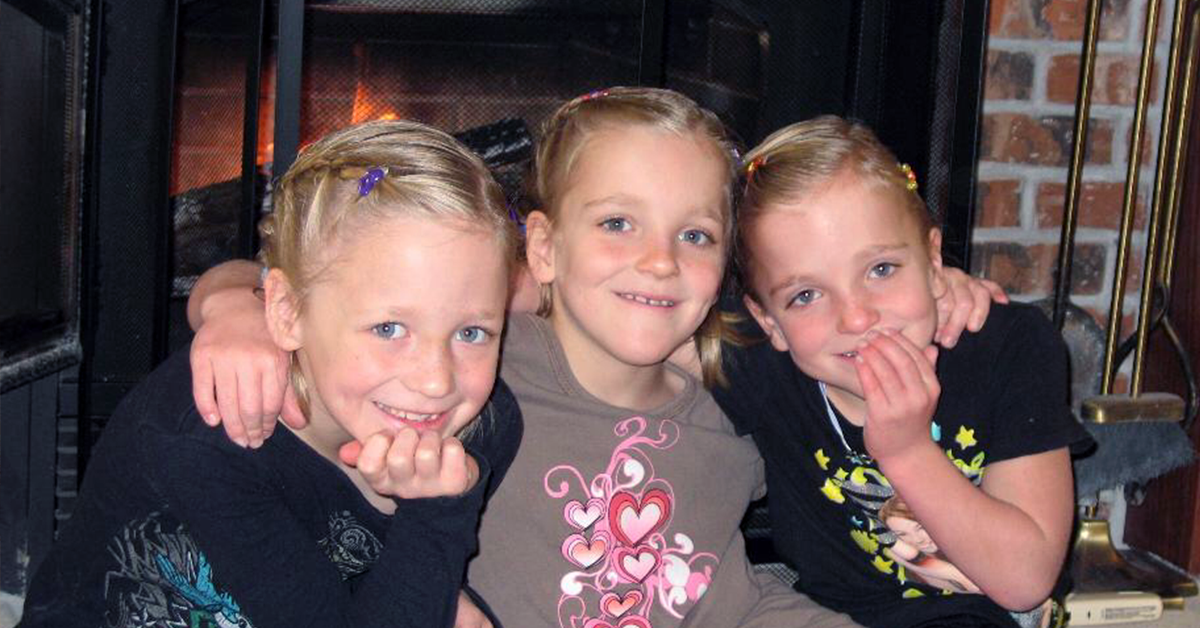 They made national news when separated as babies, but now these once-conjoined twins live normal lives in the Midwest.

Life on a hobby farm in the suburban outskirts of Des Moines, Iowa, for 17-year-old triplets Madeline, Mackenzie and Macey is pretty much like an extra helping of Americana with a healthy side of sweet corn and a milkshake filled to the brim. Their days are filled with schoolwork, planning for college and afterschool activities and jobs. Madeline runs track and is in show choir. Mackenzie has found her calling via Future Farmers of America. And Macey spends every spare hour she can working the counter at the Dairy Queen with her best friend. 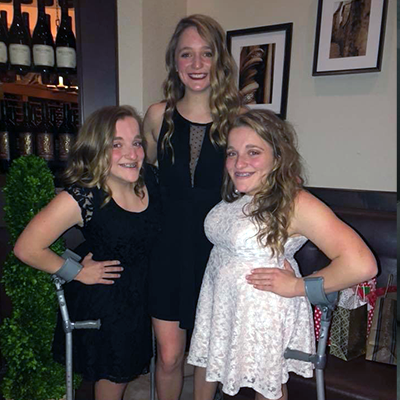 “I take the orders because nobody likes to take orders, because if we’re busy you’re the person who has to deal with people. So I’ll take the people’s money and hand out their Blizzards, and Liberty makes the ice cream,” says Macey.

Naturally, there are chores—this is the Midwest and a farm, after all, and there are animals to tend to. (Madeline’s in charge of the trash, too.)

“My pony is Nancy—Midnight Nancy—and Macey’s horse is Smoke and Madeline’s is Lulu,” Mackenzie adds, going into more detail. “Nancy had a pig disease when we found her, and my mom has a thing where if she sees a sick animal she can’t leave it alone.”

And, of course, there’s the hanging out with the friends and going out for rides in cars in a small Midwestern town.

“We either drive around or watch movies, or we usually go eat together, because it’s the only thing to do in town,” Macey says.

“My driveway looks like a used car lot,” the girls’ mother, Darla, says, laughing and noting that each of her daughters has her own car and hectic schedule. “There are five automobiles at any given time.”

All in all, it’s a life that many American teenagers would recognize and understand immediately—except when strangers come up to them in public and begin peppering them with questions they’ve had to answer their entire lives.
“I don’t really like to be known as the girl that was conjoined to her sister,” Macey said. “At school, we want everybody to know us as normal kids.”

Mackenzie and Macey made national news as infants. Though they and Madeline were born as triplets, Mackenzie and Macey were conjoined, sharing a pelvis and a third leg—a set of circumstances that is incredibly rare. In September 2003, the pair were separated at Children’s Hospital Los Angeles in a bogglingly complex, 24-hour surgery that required an army of specialists and support staff and that followed intense planning at seemingly endless levels. 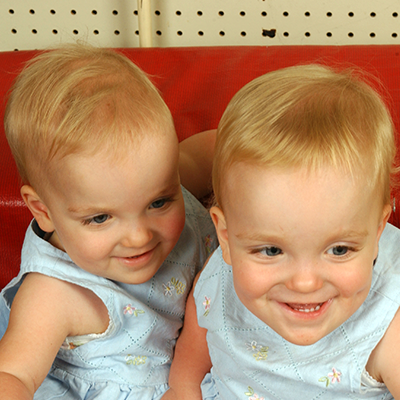 “It was in the vicinity of 100 people once you count the various shifts of nurses, radiology technicians, surgeons—just for the O.R. portion—and then the countless other people involved in post-op,” says James Stein, Chief Medical Officer at CHLA, and Ford Theodore Miller Murphy Chair of Surgical Oncology. He was the lead doctor on the babies’ separation surgery.

They needed so many of the CHLA staff because the decision to separate Mackenzie and Macey affected seemingly almost every aspect of the tiny children’s bodies.

“It was making sure we could safely separate the liver and the intestine where it joined together and separate the pelvis and still get the pelvis closed into a ring and then close the abdominal wall,” Dr. Stein says. “Because they shared a lot of skin and muscle, we had to get that closed as well. From the anesthesia standpoint, there was the whole piece of having two babies asleep at the same time and then in separate rooms for a period of 24 hours, and then beyond that, it came down to the post-op care and taking care of them in the neonatal ICU, and rehab getting them ready to head home.”

Darla, who had just adopted the triplets at that point, remembered the constant shuttling back and forth to the hospital from what was then their home in Riverside, California.

“It was a lot of driving to L.A.,” she says. “A lot of paperwork. But on the day of the surgery, I would say there was just a sense of peace. I was never worried. I just had a sense that everything would be OK because I had immense confidence in the team. They were just above and beyond to make sure everything was in order and safe, and that gave us a lot of comfort.”

Dr. Stein credited the deep bench CHLA fielded as a reason why everything from planning to post-op went so smoothly.
“On so many levels, it’s something a major children’s hospital is able to pull off, and I think we were uniquely positioned with the expertise in the various subspecialties—general pediatrics, neurology, orthopaedics, plastic surgery—to be able to take care of this,” says Dr. Stein. “Even leading up to it, our radiologist had to come up with ways for the types of visualization we needed to make those critical decisions we needed to plan for the surgery. We had a core of nurses who were so dedicated to figuring out how this could work. It really covered this whole organization.”

Neither Macey nor Mackenzie remember anything about the surgery, but Madeline said she still has fuzzy memories of visiting her sisters before and after at CHLA.

“I remember a scary elevator with doors that opened both ways,” she said. “I remember Dr. Stein a lot. He was just a super nice guy and always really fun to interact with him and be around him.”

But though their memories of CHLA are vague at best, the triplets, now juniors in high school, credit the hospital and the people who took care of them for giving them inspiration for what to do with their own lives. Mackenzie intends to become a lawyer who fights on behalf of farmers. Madeline wants to become a nurse anesthesiologist. And Macey, who had a longer post-operation recovery than Mackenzie, is going to be an ultrasound technician. 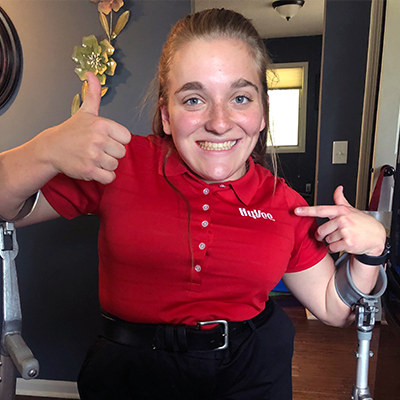 “I was sick for a while and had to have all my ultrasounds done a lot, and I found it fascinating how they figured out what was wrong with people,” Macey said.

Back in Los Angeles, Dr. Stein said the family left a lasting impact on CHLA, too.

“We continue to talk about this story as a big event for us in that it really elevated us and, internally, our ability to work together and take on the most complex problems,” he says. “One of the really enjoyable parts of being at a place like Children’s Hospital is being able to take in the most complex cases out there and have both the personnel and infrastructure, as well as the approach to teamwork to make that all successful.”

There are still lingering issues, of course. Mackenzie just had surgery to treat worsening scoliosis. And both use crutches again, shedding the prosthetic legs that they used to wear when they were younger. Because standard prosthetic legs hang some of the weight on the hipbone, the girls, with their reconstructed pelvises, had to instead resort to using bulkier, less mobile devices that weighed 25 pounds.

And then there are the questions.

“I’m glad it’s not an every month thing where people come up and say, ‘Hey, I want to know what’s going on with you,’ because it’d be boring,” Macey says.

“I’d rather have people ask questions than stare,” says Mackenzie. “I don’t mind people asking questions.” She’d probably rather talk about her new position as an officer with Future Farmers of America, though. 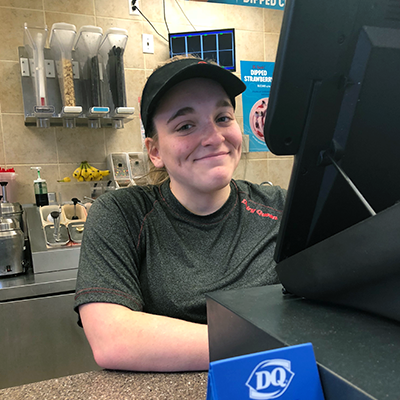 “We’ve been told time and again that we’re really good at explaining it, especially to little children,” Madeline said. “I tutor first graders, and we brought Mackenzie in once and explained what happened and what the surgery was. One asked her, ‘Can you read your sister’s mind?’ We explained that they were stuck together at the pelvis and showed them were the bone was, and no, they can’t read each other’s minds—” Madeline couldn’t help but chuckle. “—though sometimes we do consider telling them that they can,” she admitted. “But we don’t want them to be confused.”

But beyond the occasional surgery—and the maybe annual check-in from a newspaper or magazine—these girls are your normal, everyday teenagers.

“They’re just texting and Facebooking and whatever, hanging out with their friends,” Darla said. “They’re just normal kids. It’s normal life for us. I know sometimes people say, “Oh, that’s so amazing, I couldn’t do that. But you know what? You could do it. The girls are well-rounded, and they make it really easy to parent them.”