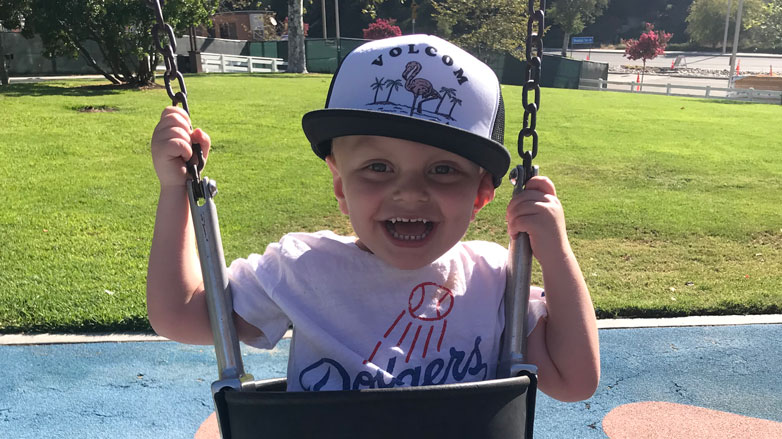 Roughly 20,000 people in the United States live with hemophilia, a bleeding disorder in which blood lacks the requisite protein to clot normally. Few have lived with the condition for as much of their lives as 3-year-old Braxton.

Braxton was diagnosed within days of his birth. Since then, doctors from Children’s Hospital Los Angeles have worked tirelessly to ensure that he and his Woodland Hills, California, family live relatively normal lives. The journey hasn’t been easy, but his parents, Brenda and Marty, say they’re thankful for the expert care—and gentle education—CHLA doctors and nurses have given them along the way.

“There were times when this has been scary and we’ve had no idea how we were going to get through it,” says Brenda. “Today we’re the parents of a happy and relatively healthy little boy.” 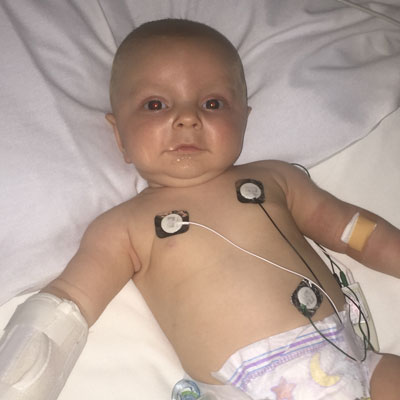 Braxton was born with a big bump on his head—a curious symptom that prompted his pediatrician to send him to CHLA for further evaluation. Within two hours, Emergency Department doctors figured out he had hemophilia.

Braxton and his family were referred to Guy Young, MD, Director of CHLA’s Hemostasis and Thrombosis Center and Attending Physician in the Division of Hematology, Oncology and Blood and Marrow Transplantation.

Dr. Young diagnosed Braxton with severe hemophilia, the most common type of the disorder. At the baby’s three-month check-up, he noted that the biggest concern for Braxton was bleeding on his brain, a condition that could create pressure in his skull and cause brain damage or death. The doctor then explained to Brenda and Marty what symptoms a young baby would exhibit during a bleed: inconsolable crying, refusal to eat, swelling in the joints. In a shocking coincidence, Braxton began exhibiting some of the symptoms at home that very night.

Brenda and Marty brought him back to CHLA, where doctors determined that he was experiencing two separate brain bleeds. Luckily for Braxton, Dr. Young and his team were able to respond immediately.

“We have that discussion [about symptoms and what to expect] with every hemophilia family and every year we get a few patients who come in with bleeding around their brains,” said Dr. Young, who also serves as Director of CHLA’s Clinical Coagulation Laboratory and Professor of Pediatrics at the Keck School of Medicine of USC. “I’m not sure we’ve ever had a patient come in with strong symptoms like that on the same day.”

Dr. Young and his team came up with a treatment plan. Patients with hemophilia are missing a protein in their blood—a protein colloquially referred to as Factor 8. This protein helps blood coagulate and clot—when it’s absent, you bleed longer before your body recovers.

The most common treatment for patients missing Factor 8 is to introduce a synthetic version of it; initially doctors (and later Brenda and Marty) administered this medicine through a Broviac line. Eventually, around his 10-month birthday, Braxton had surgery to put a port in the right side of his chest. Currently, Brenda and Marty inject the protein here every 48 hours or so.

Adjusting to a new reality 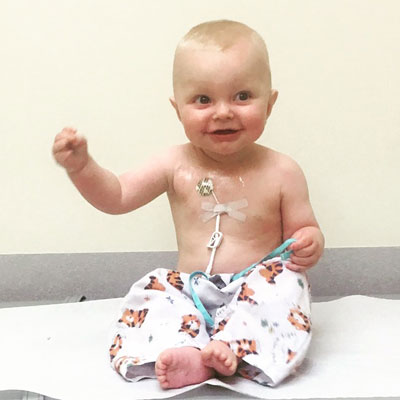 Because Braxton was diagnosed at such an early age, Brenda and Marty were able to incorporate day-to-day realities of his treatment into their lives as parents of four. Grappling with the psychological and emotional aspects of raising a child with hemophilia was much more of a slog.

Education came first. Though hemophilia is congenital and passed along the mother’s lineage, Brenda had no family history of the disorder and therefore no experience with it. Her only knowledge of hemophilia was in relation to Ryan White, a patient in the early 1980s who contracted HIV during a blood transfusion. Marty didn’t even know that much—until he started reading literature from Dr. Young and the National Hemophilia Foundation online.

While this material broadened their knowledge, it also spiked their anxiety. Babies are curious by nature, and sometimes they fall. Both Brenda and Marty became terrified that any little scrape or bruise would trigger a complicated bleed that threatened Braxton’s well-being and required immediate hospitalization. They envisioned a kid growing up in kneepads and helmets.

“I remember thinking, ‘How are we going to keep this kid alive without sticking him in a bubble?’” says Brenda, 36. “I was truly terrified.”

The more they read, however, the more comfortable they became. One piece of literature said it’s good for hemophilia patients to lift weights and be active. Another encouraged parents of kids with hemophilia to back off while kids learn balance and how to walk. Marty joined some support groups where other parents shared stories that put his mind at ease.

“Severe hemophilia is manageable,” he said. “With the exceptions of having to do regular treatments and having to be vigilant about signs and symptoms of bleeding, patients with hemophilia can live relatively normal lives.”

One of the only things Braxton won’t be able to do: Play contact sports. For Marty, 32, a football fanatic and football coach at a Los Angeles-area high school, this was tough news to digest.

Marty admits he had dreamed of Braxton playing football, and immediately struggled with the reality that these dreams never would come true. Marty kept most of these struggles to himself. Then, one day, after a regular check-up at CHLA, he came face-to-face with the need to let them go.

“We walked out of the hospital room, out the double doors and right by a little girl who was very sick and whose mom looked like she hadn’t slept in weeks,” says Marty, looking back. “In that moment, I recognized I was being so stupid and selfish about football. I realized I just needed to be happy Braxton was going to be OK.” 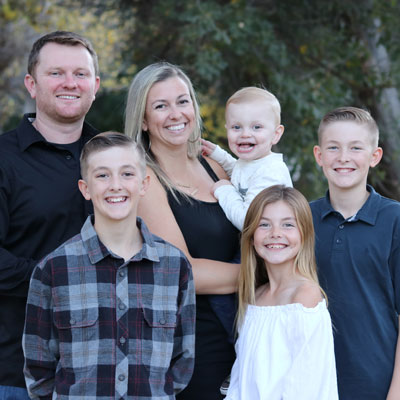 Since those first two brain bleeds, the 3-year-old hasn’t had another.

At some point, Braxton will need another surgery to remove his port; from that point forward Brenda and Marty will have to decide if they want to put in a new port or switch to a new medication that necessitates only one shot per month.

Today, Braxton runs, jumps, climbs, swims, and dances like any other toddler. He’s super-happy. He chases his siblings—who are 12, 10, and 9. He falls down. He gets scratches and cuts. Sometimes he even bruises. With the help of his medicine, each of these minor scrapes and bruises has healed perfectly and uneventfully. And so long as Brenda and Marty watch Braxton for signs of internal bleeding, Dr. Young believes the boy should be fine.

And Brenda and Marty certainly will remain vigilant. The two have become active members of the local hemophilia community, and were outspoken participants in raising awareness in conjunction with National Bleeding Disorder Month this past March. Both parents say they are committed to never letting their son’s condition define him.

“We don’t ever want him to think he’s different from other kids or that he can’t do things other kids can do,” says Brenda.

“There’s a little helicopter parent in all of us, and if you have a kid with hemophilia, you’re always going to be worried about the worst thing happening,” he says. “The reality is that every kid needs to learn to fail.”