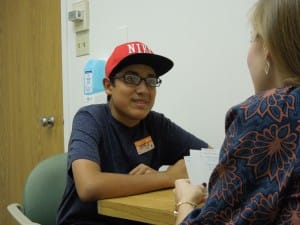 Alfredo (Freddy), 15, had a history of hearing loss. In the summer of 2013, he was referred to Children’s Hospital Los Angeles to see an ear specialist. The doctor identified something that could potentially be much more than just a hearing problem, so an MRI was requested.

Freddy’s MRI showed a mass in the posterior fossa, a small space in the skull between the brain stem and the cerebellum. Although a patient's prognosis is good if a posterior fossa tumor is caught early, it could potentially be life threatening if it grows. Tumors in this small area of the brain can block the flow of spinal fluid and press on delicate structures. Freddy had the tumor removed at Children’s Hospital Los Angeles in June 2013. After the surgery, he spent several days in the hospital and was later transferred to the inpatient rehabilitation unit, which is part of the Division of Rehabilitative Medicine (rehab). When he arrived to rehab, Freddy was experiencing nausea, pain and poor balance, which made it difficult to walk and sit. He also had changes in the way his brain functioned and a hard time seeing. Initially, Freddy expressed concerns about going to rehab. 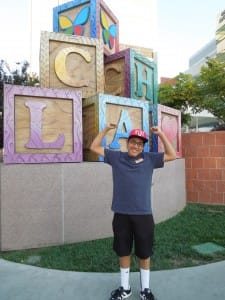 Freddy Never Gave Up During His Rehabilitation

Freddy has fond memories of his time in rehab. “What I remember most is my three therapists,” he says. “Lynn was my physical therapist (PT), Jackie was my occupational therapist (OT) and Abby was my speech-language pathologist. They really helped a lot. When I got to therapy, I couldn't walk, I couldn't see straight and I couldn't eat well.” Freddy’s therapists were amazed by his determination, positive outlook and rapid progress. Lynn remembers Freddy as a fighter who never gave up. “Despite his pain and nausea, he worked really hard,” she says. Together, they focused on pain management, neck range of motion, endurance and balance. His speech therapist, Abby, was so impressed with how aware Freddy was about his strengths and weaknesses. When working on a memory task, Abby recalls Freddy saying, “I always forget either the first word or the last word. I should concentrate on those more.” Abby and Freddy worked together to develop memory strategies, such as rehearsing the information, drawing associations and visualization that worked for him. They also targeted Freddy’s ability to process longer, more difficult information and follow multi-step commands. These skills were particularly important for Freddy’s transition back to school. He was an active participating in discussions with the rehab team about his return to school, specifically strategies that we would use, resources to seek out and places to find support.

Before his surgery, Freddy was hanging out with the “wrong crowds” and getting into trouble. After he was diagnosed with the tumor and had surgery, “I realized that not everyone gets a second chance,” he says. Now, Freddy is working hard at school and keeping up with his classes. He has new goals for himself:

“I picked speech-language pathology because I think the thing that is most hard for me, is memory,” shares Freddy. “I want to help other kids who are in the same situation as me so that they can remember.” As he thinks back to his time at Children’s Hospital Los Angeles, he remembers the hospital as being a happy place. “It’s so much fun there,” he says. “At first, I thought it was going to be scary and spooky, but it turned out to be much better.” Despite spending most of his summer in the hospital, Freddy thinks it was a summer that was hard and difficult, yet pretty good.

Now, Freddy continues to receive physical, occupational and speech therapy as an outpatient at Children’s Hospital Los Angeles. His rehab therapists always look forward to his visits. “It is such a treat to see his smiling face when he walks in,” says Abby. Freddy will never forget his experience at the hospital, the doctors and therapists changed his life. Freddy’s advice to other kids who are in the hospital, “Don’t give up. Children’s Hospital Los Angeles is a happy place.”

​How You Can Help