A Father and Son, and the Doctor Who Saved Them Both 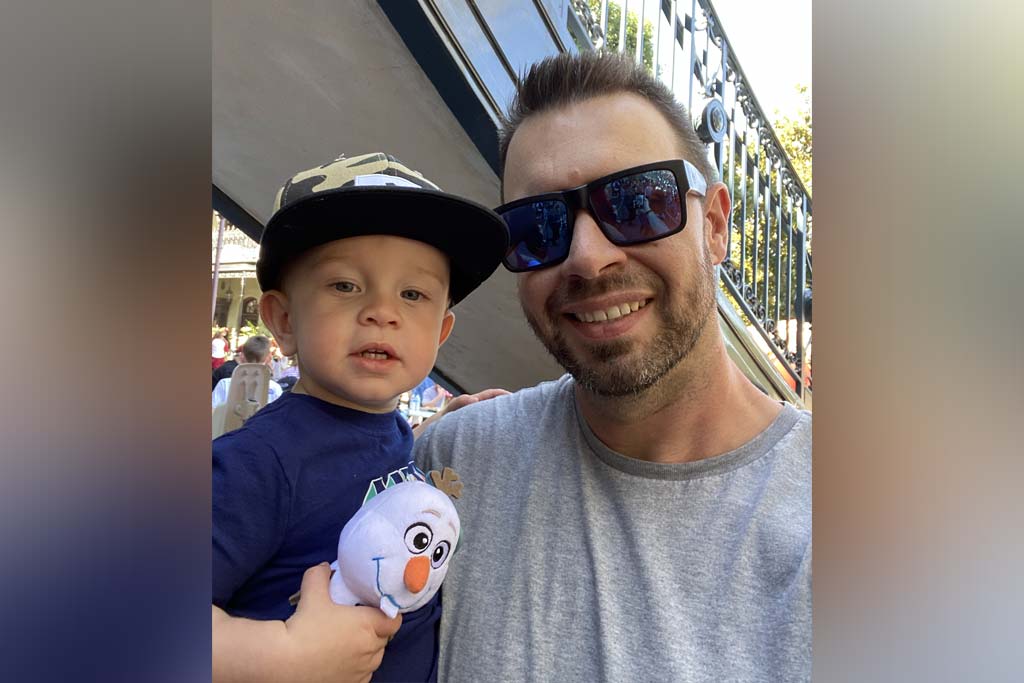 Devastated that his newborn son had inherited his heart condition, Jeff sought out the surgeon who operated on him nearly two decades earlier.

You should know that it’s no story. It happened. And what’s more, I buried the lead. That is to say, I didn’t even get to the amazing part yet.

Red and blue indicate blood flow. White means obstruction, interference, like highway flares signaling a traffic snarl. If you wanted to be clever, you could say Jeff knew it by heart: Red and blue, good. White, bad.

The stakes were different here. This wasn’t his exam; it was his day-old son Bryce’s. As the technician steered the ultrasound probe over Bryce’s chest, Jeff kept pace with what developed on the monitor.

“I saw red, blue, with a big chunk of white. The white is turbulence. I know that because I have the same thing. I have turbulence on my heart.”

The diagnosis of supravalvular aortic stenosis, a congenital narrowing of the aorta just above the aortic valve, which leads blood out from the heart to the body, never got in Jeff’s way. His parents wouldn’t allow it. 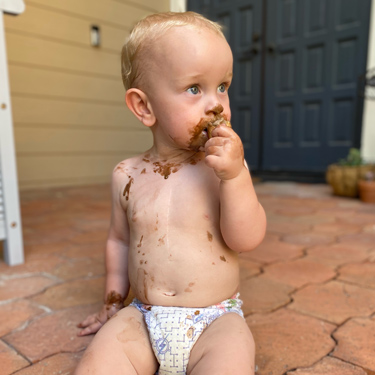 Bryce will live like any other kid, his father says, which includes wearing his ice cream.

“They always told me ‘You do what you want,’” he says. “My whole life, my heart surgery has never been a restrictive thing. It’s just been a thing.”

Jeff had two surgeries to repair the defect, one at 18 months old and another at age 13, the latter at Children’s Hospital Los Angeles. All along, he did some things that weren’t properly doctor recommended.

“I played tackle football and rugby. I wasn't supposed to, but I did. I raced motorcycles in the desert. I never thought about my heart because I've been conditioned to think, ‘Look, you're a normal person. You listen to your body. If you're tired, stop. If you’re hurt, stop.’ I'm 6-foot-1, 215 pounds. I'm not as fragile as they say."

But the heart displayed on the screen in front of him belonged to his 20-inch, 8-pound newborn son. As Jeff stood over the tech’s shoulder and saw the blotches of white emerge, he began to wobble. What he recognized shattered him: Bryce had inherited his heart defect. He left the room, not wanting to crumble in front of his wife and mother-in-law.

“I went outside and started bawling,” Jeff says. A nurse walked over to him, but he was distraught. "I said, ‘I know what's happening! I see it!’”

He pressed the echo tech for information, but she deferred to the pediatrician, who sent Bryce to a cardiologist for more tests. The formal diagnosis of supravalvular aortic stenosis came after images taken of the heart revealed Bryce’s condition was identical to his father’s: narrowing in arteries on both sides of the heart, the aorta and the pulmonary artery, which carries blood to the lungs.

The cardiologist began to discuss the surgical options, and Jeff thought instantly of the doctor at Children’s Hospital Los Angeles who operated on him when he was 13. He asked: “Is there any way we can get Dr. Starnes?’”

A shot in the dark

Jeff’s aorta had narrowed since the initial surgery done to widen it when he was a baby. At that time, the fix that doctors inserted into the blood vessel was made of synthetic materials that could not adapt to Jeff’s growth as he entered his teens, causing the artery to tighten up again.

His mother was referred to CHLA, where his case landed with Dr. Starnes. Because the area above the aortic valve had grown so diseased, rather than attempt to repair it, Dr. Starnes removed it altogether, replacing it with a Dacron tube, which fit neatly into the excised section and allowed blood to flow through it. Dacron is also made of a synthetic, but Jeff had reached an adult size, so there was no threat that he would outgrow it.

That was 2002, and Jeff had not seen Dr. Starnes since. He had no reason to believe he was still at CHLA.

“I just took a shot in the dark,” he says. “I didn't know if he was still doing surgery or what.”

But he knew that he wanted for his son what Dr. Starnes had provided to him: “I live my life as a normal person. And I owe it to him.”

Bryce’s cardiologist was not only receptive to the idea of seeking out Dr. Starnes, he had arrived at it himself, replying to Jeff, "That's who we are going for.”

“It looks like an hourglass,” Dr. Starnes says as he sketches out the appearance of supravalvular aortic stenosis, demonstrating how the width of the aorta dives in where the artery is affected, and then rounds back out again. 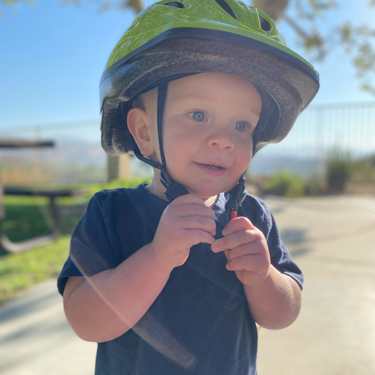 Dr. Starnes would not place any restrictions on Bryce’s physical activity.

Untreated, the disorder can lead to heart failure, where the heart doesn’t pump enough blood out to the body’s other organs, and that can be fatal.

In July 2020, Dr. Starnes operated on Bryce, then 5 months old. Though Bryce’s condition was the same as his father’s, the repair was different, due to factors of age, size and extent of the stenosis—and so was the outcome. Dr. Starnes sewed patches into three separate locations in Bryce’s aorta to open the narrowing, using material drawn from Bryce’s heart sac, the pericardium.

Because the patches were constructed from Bryce’s own heart tissue, his aorta will have the chance to grow normally. As a result, Dr. Starnes believes that, unlike his dad, Bryce will not need a second surgery. And unlike the mandates his father received, Dr. Starnes doesn’t see any need to set limitations on Bryce’s physical activity.

“If he wanted to play sports in the future, I certainly wouldn't say no to it,” he says. “I wouldn't put any restrictions on him. I don’t think there’s going to be a problem.”

Moving on from guilt

In the aftermath of Bryce’s diagnosis a year ago, Jeff was engulfed by guilt.

“My wife and I were high school sweethearts,” he says. “When we were young, we asked each other, ‘If someone gave you three wishes, what would they be?’ And one of my wishes was, I wish none of my kids have my heart condition. I wanted them to never have to worry about it, never go through surgery, never go to cardiology appointments or take pills or do anything like that. I get winded and I don't have the same performance as other people, and I wanted my kids to have the most normal life possible.”

Before their daughter was born, Jeff and his wife, Kristen, were told there was a 3%-5% chance of Jeff’s heart defect being passed down. They decided to have a fetal echocardiogram performed to check for abnormalities. The test showed a normal heart. With Bryce, they declined the procedure, figuring it wasn’t going to change the course of the pregnancy.

“There's nothing they could do anyway," Jeff says. “Never once did I think I would pass this down. That's why it was so heavy.”

Since the surgery, he has let all the self-recrimination go. Bryce’s follow-ups have all indicated good heart function, and Jeff now plans to encourage his son just like his parents did for him.

“He's going to eat dirt,” he says. “He's going to learn how to ride a bike and fall. He's going to jump off a tree, probably break some bones. But that's what kids do, and I want him to experience life as any other kid would. He's had his surgery and the problem was corrected. I’ve moved on from it. It's just now something that I have to bond over with him. What other father-son has this same thing?”

It’s a lot to ask of Dr. Starnes to consider a case unusual. He has four or five cases a day of the most complex and perilous variety, and he has decades of them to draw from. Even so, he acknowledges the uniqueness of operating on a father and son for the same heart defect 18 years apart. 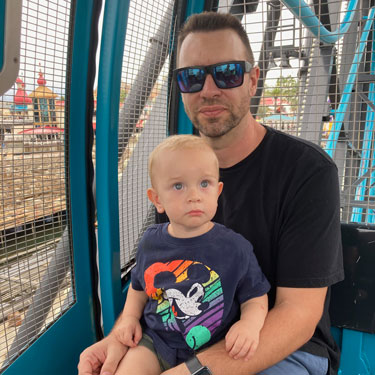 Jeff says of his unique bond with Bryce: “What other father-son has this same thing?”

Plus, it’s another instance of the growing encounters he is having with adults whom he treated as kids. He relates the story of one of his recent patients at Keck Hospital of USC, a longtime CHLA affiliate, where he is Surgeon-in-Chief, whom he operated on when she was 4. She reappeared at Keck, now in her 20s, needing another heart surgery, Dr. Starnes says.

“I pulled aside one of my colleagues and I said, "Look at this! I operated on her when she was 4!

“It's a very rewarding profession to be in,” he says, “to take care of children who have serious heart disease and return them to more normal lives, sometimes completely normal lives, so that they go on to be productive human beings.”

That’s what he expects for Bryce. “I think he’s good to go to have a normal life.”

Jeff says he withheld the Big Reveal from Dr. Starnes until after Bryce’s surgery. “He came out and told me everything went fine. That’s when I said, ‘I just want to let you know, you also performed my surgery when I was 13.’”

They chatted about it, but Jeff didn’t get to express himself in full as he wanted. That opportunity came months later when the two joined together for a local news piece. Jeff seized on the 20 minutes he had with Dr. Starnes in the Zoom lobby as they waited for the virtual interview to start.