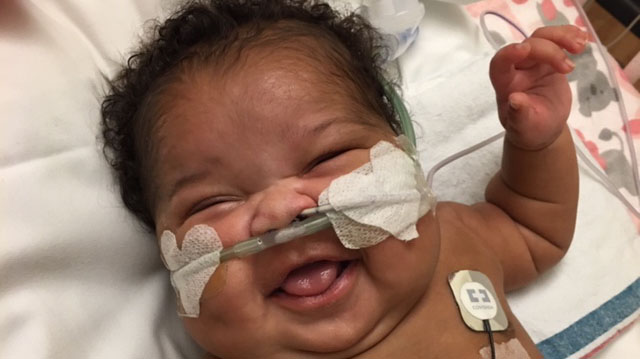 To countless families, Children’s Hospital Los Angeles is a home away from home. That is certainly the case for Quinn, born Dec. 4, 2018, and her parents, Quinshae and Keith. Soon they hope to take their daughter home to Riverside, but for now, CHLA is the only home the 7-month-old has known.

When Quinshae was 19 weeks pregnant, her OB-GYN detected a fetal abnormality and suspected a congenital diaphragmatic hernia (CDH), a condition in which the diaphragm fails to develop properly. A thin sheet of muscle, the diaphragm plays an important role in lung function and creates a separation between the abdomen and the chest. CDH is classified from mild to severe, and prenatal exams suggested that Quinn would be born with the most severe and highest risk form of CDH.

Quinshae had never heard of CDH and immediately started doing 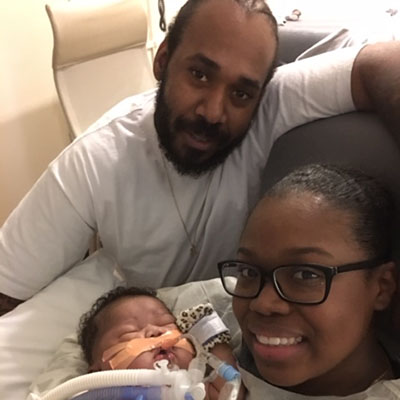 her research. She even travelled to Northern California to learn about a clinical trial to repair the defect in utero. Although Quinshae and Keith wanted to do everything possible for their baby, they felt the risk of the experimental procedure outweighed the risk of carrying Quinn to term. Quinshae returned home and leaned on her faith—and her determination.

“I worked until 38 weeks,” Quinshae says. “That’s how I stay focused. Even though I knew something was going on, I felt that for me, for my baby, I needed to carry on as normally as possible.”

Quinshae, 27, has perfected her ability to stay focused and positive through more than her share of loss.

“I’m an open book, so I’ll start from the beginning,” she explains. “This is my third pregnancy and Quinn is the only one that’s made it.”

Her first pregnancy ended at 21 weeks, and her second at 12. Distraught but determined, she and Keith underwent genetic testing before trying to conceive a third time.

“Everything came back fine,” Keith recalls. “They said there was no chance of something like that happening again.”
When they found out at 19 weeks gestation that Quinn would be born with CDH, Quinshae decided not to let the diagnosis overtake her excitement and joy about having a child.

“I prayed for Quinn,” she says, “and I felt like this is the baby that’s supposed to make it to the end.”

Four days before her due date, just down the street from CHLA’s Sunset Campus, Quinn arrived.

“The doctors said if they couldn’t get her to where she needed to be, we’ll send her to CHLA,” Quinshae recalls. “I was confident that Children’s Hospital could take it to the next level if she needed it.”

Within hours of her birth, the need was clear. Quinn was quickly transferred to the Steven & Alexandra Cohen Foundation Newborn and Infant Critical Care Unit (NICCU) at CHLA and placed in the care of a team of specialists with extensive experience in CDH.

“When an outside hospital contacts us with an emergent referral,” says Rachel Chapman, MD, Medical Director of the NICCU and Associate Chief, Division of Neonatology, “our access center, transport team and NICCU staff are prepared to respond immediately.” 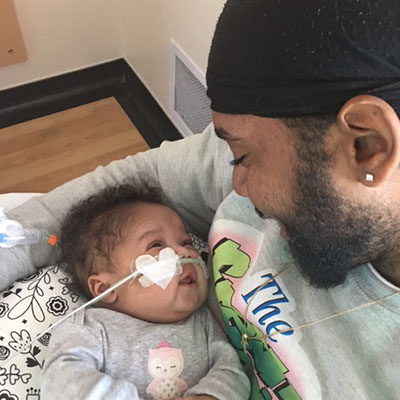 Attending Physician Narayan Iyer, MD, was present upon Quinn’s arrival at CHLA, and together with a team including highly specialized neonatal nurses, extracorporeal membrane oxygenation specialists, surgeons and respiratory therapists, quickly assessed and managed Quinn’s life-threatening condition. Both Dr. Iyer and Dr. Chapman, along with their colleagues, have been overseeing Quinn’s care from the moment she arrived at CHLA.

Because babies with CDH have small, underdeveloped lungs and abnormal development of the blood vessels within the lungs, the immediate concern with Quinn was pulmonary hypertension, or high blood pressure in the lungs. To relieve the high blood pressure and give her fragile lungs time to adjust to life outside the womb, she spent two weeks on extracorporeal membrane oxygenation (ECMO) therapy.

“That big machine, it’s overwhelming,” recalls Quinshae. “You could hardly see her. She was hooked up to so much stuff. So the beginning was really rough, even though we knew it would be a miracle if Quinn didn’t need [ECMO].”

Since 1987, CHLA’s ECMO Program has treated more than 1,200 children and is the largest program of its kind in Southern California. A highly specialized ECMO team remains at the bedside 24/7 while babies are on this therapy. Because being on ECMO carries risks, including neurodevelopmental disability and bleeding, there is a limited number of days babies can be on it—and Quinn reached the limit.

Pediatric Surgeon Juan Carlos Pelayo, MD, FACS, FAAP, performed Quinn’s repair surgery just before she came off ECMO, carefully placing a piece of mesh in Quinn’s abdomen to mimic the missing diaphragm. He left the wound open to allow her swelling to go down for several weeks before performing a second surgery to close the repair.

To manage Quinn’s significant lung hypoplasia, Manvi Bansal, MD, Attending Physician in the Division of Pulmonology and Sleep Medicine, has been another important member of her team. For the time being, Quinn needs a tracheostomy and home ventilator to assist with her breathing, and Dr. Bansal will continue to oversee her specialized pulmonary care after she goes home.

A true home away from home

Through major holidays and several changes of season, Quinshae has been by her daughter’s side. While it’s not always been easy, she is grateful for the many ways CHLA takes care of everyone in the family.

“There are so many different activities. I’m in a scrapbooking club, which is awesome. I have two scrapbooks: one has just her cute little pictures and the other one I’m starting from the beginning. Those pictures aren’t so nice but to see her progress—wow. She has made it so far.”

Quinshae and Keith also appreciate that when they can’t be at the hospital, Quinn is surrounded by love.

“We didn’t get to hold her until she was 2 months old. But ever since, if she’s fussing, everyone knows to hold her and that will calm her down. She doesn’t even care who’s holding her—Cuddlers [volunteers in the NICCU] are amazing!”

Quinshae and Keith say they’ve grown especially close to Quinn’s primary nurse, Sarah Daggett, RN, who attends the team and family meetings and always ensures Quinn gets the care she needs. As Dr. Chapman puts it, “Everyone on the team thought Sarah was Quinn’s primary nurse even before she was officially assigned as her primary.”

“Knowing that she is in great hands, even when we are away, is key,” Keith says.

Quinshae agrees. “I feel like Sarah is her second mom.” 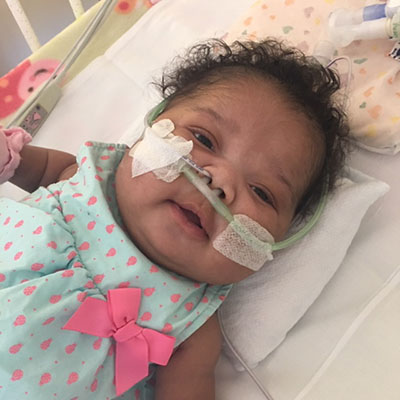 For the past few months, Quinshae and Keith have been learning how to care for Quinn’s ongoing medical needs when they leave CHLA in early September. According to Dr. Chapman, it is not uncommon for babies with CDH who need ECMO to develop chronic lung disease, and Quinn is one of those cases.

Because Quinn will need a home ventilator for as long as a year or two, the family will be part of the Home Ventilator Program, which is a unique collaborative effort of multiple providers to train families in their children’s complicated care. She will be closely monitored and followed by Dr. Bansal after discharge as her lungs strengthen over time and she can be weaned off the ventilator support. She will also participate in the Newborn Follow-up Program, and Dr. Pelayo will follow her throughout her childhood in case she needs another surgery down the road.

At 8 months old, Quinn is a physically strong, feisty little girl who has earned the nickname Boss Baby.

“As Dr. Chapman says, ‘Everything is on Quinn’s timing,’” Quinshae explains. “One time when they tried to wean her off [the ventilator], Quinn was like, ‘Oh, I’m not ready!’ And then later she was looking at them like, ‘Alright, you can test me now!’ The doctors at that time didn’t think she’d make it off the vent more than two hours and she ended up lasting much longer.

“It’s been a long journey,” Quinshae adds, “but I can honestly say Quinn beat the odds. She really is a Boss Baby!”

Sharing their story to inspire others

Through all the ups and downs, Quinshae maintains her sense of optimism and gratitude. She is determined to inspire others.

“This is not a good thing to be going through, but CHLA has been an amazing experience. And I feel like Quinn is the right baby to inspire others. Even though she’s been on ECMO, even though she’s had surgery and been really sick, she’s doing great. It’s about the love, and just being there. It plays a big part.”

Keith agrees. “We are sharing our experience for the other parents who might be going through this now or will in the future.”

Quinshae offers this advice to other NICCU families: “Keep your head up. Take this on as something that is making you and your baby stronger in the end. Right now your babies are caterpillars, but they will get their wings and become butterflies. When Quinn has her butterfly moment and we go home, it’s going to be amazing! I’m looking forward to that.”