Ani-mazing! One Creative Patient at CHLA

Children’s Hospital Los Angeles might have its very own illustrated superhero, thanks to 16-year-old patient Victoria Kane. 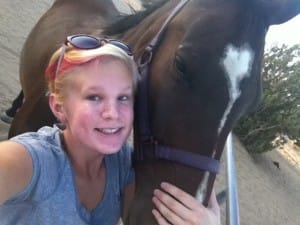 Tory, as she likes to be called, has been in and out of CHLA since she arrived at the hospital at age 7 as a retinoblastoma survivor for annual check-ups, but that hasn’t stopped her from being a triple threat: She enjoys trumpet playing, competitive horse riding and, of course, drawing.

Though riding and the trumpet had to be slowed down due to the recent discovery of a primitive neuroectodermal tumor (PNET), a cancerous tumor usually occurring in those under 25 years of age, Tory has not lost her passion for art. In fact, it has helped her hone her skills while dealing with the challenges of her medical journey.

Drawing out her disease

PNETs are rare and research has shown that they occur in either the brain or on the spine. Tory’s, however, is located in the sinuses. To better understand her disease, she channeled her frustration into art. 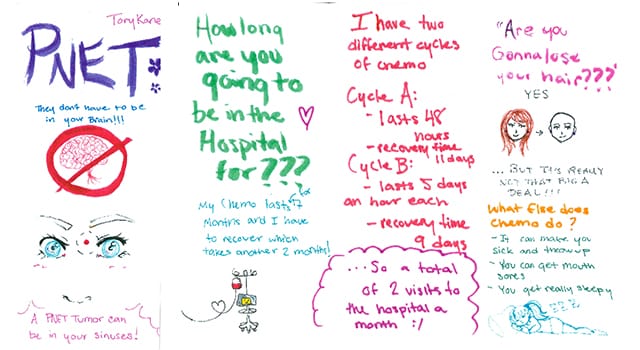 “Tory is very bright and funny, but also perceptive,” says Nicole Albers, art therapist from the Mark Taper – Johnny Mercer Artists Program at CHLA. “So, to give her a voice and help process what she’s feeling, I told her to draw a brochure that would help explain her PNET to her family and friends in an easy way.”

Since she was 5 years old, art has always served as a great distraction for Tory. From drawing characters of her favorite TV shows to illustrating her favorite YouTubers, Tory clearly has a talent in portraiture. But her favorite has always been character design and anime (a style of Japanese animation), and it’s no surprise that it’s a favorite for others as well. 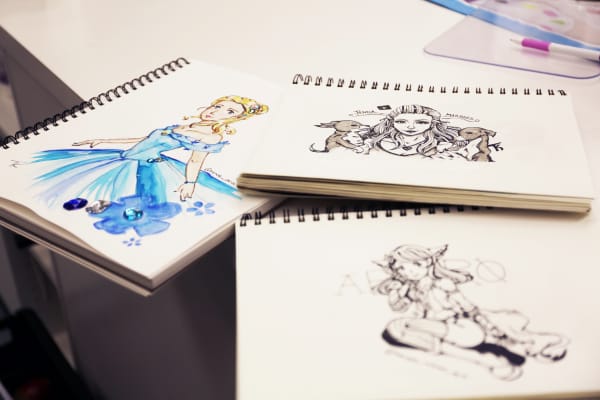 Tory’s Instagram, where she features most of her artwork, has gained over 700 followers in just a year. “It makes me happy when people see my art,” says Tory. “My art reflects who I am … and my goal is to create original characters that make people happy and inspire others to draw too.”

The creation of Titania 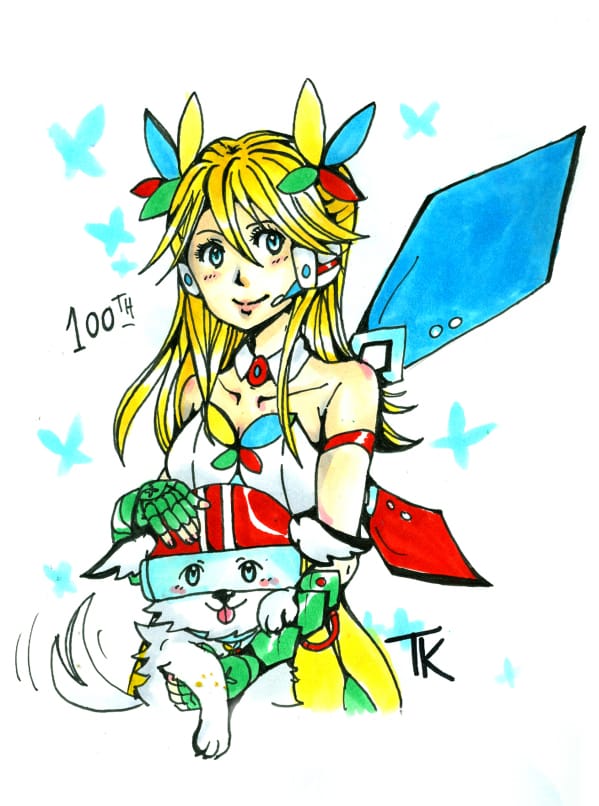 One of those original characters is Titania, a one-of-a-kind creation made especially for CHLA. Decked out in CHLA’s signature yellow, blue, green and red and named after the Queen of the Fairies from William Shakespeare’s “A Midsummer Night’s Dream,” Titania was created “to be a figure of hope and strength, someone that kids can look up to, like a superhero,” says Tory.

Titania is designed with a suit of mechanical armor, much like that of Marvel’s Iron Man, and wings made of strong Plexiglas material that resemble the butterfly logo of CHLA. Alongside her is K9, a semi-robotic dog that was inspired by the Amerman Family Foundation Dog Therapy Program. But underneath the costume, Tory explains that Titania “is just an ordinary girl.”

Although Tory says that Titania is not a character modeled after her, the similarities are hard to miss. “In Titania, and also in Tory’s other artwork, I often see a lot of colors, gestures and impact,” says Albers. “I think this echoes her creative spirit, courage and strength, which is why Titania has been so impactful. Titania is a symbol of how strong kids like Tory can be, and that they can triumph over their illness.”