A rare, polio-like illness called acute flaccid myelitis appeared on the national radar in 2014 and may be on track to return this summer and fall. Here is one family’s story, and a look at CHLA’s innovative, multidisciplinary approach.

Like many parents, Bernard and Carlene had never heard of a rare disease called acute flaccid myelitis (AFM) before the summer of 2016, when their 2-year-old daughter, Maipele, started exhibiting some strange symptoms.

Maipele, whose name is Polynesian for “sweetheart,” had had a runny nose on May 21, which grew into a cough, followed a few days later by a severe asthma attack. By the time Maipele reached a local emergency department near the family’s home in Camarillo, she was in respiratory distress. After doctors stabilized her, Maipele was airlifted to a hospital in Santa Barbara.

A few days later, back at home, Maipele “woke up as happy as can be,” recalls her father. She ran through the house, laughing. It was then her parents noticed something odd: Maipele’s right arm seemed to dangle by her side. They asked her to lift her arm. She couldn’t. “Her arm was like a dead weight,” says Carlene. “She wasn’t in pain, but she could not move her arm at all.” 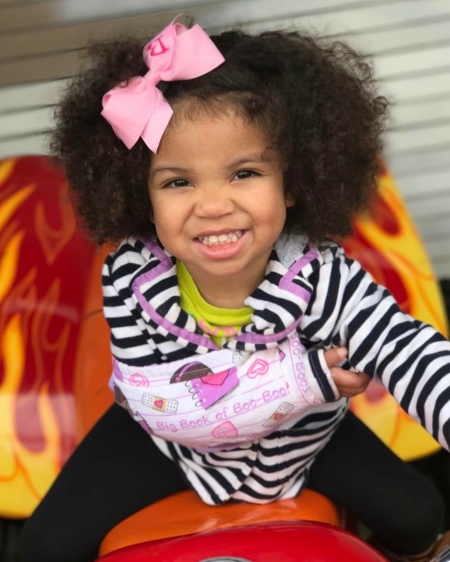 AFM is a polio-like illness that scientists suspect has a viral origin. In its worst-case scenario, the disease can leave its targets partially or totally paralyzed in one or more limbs. CHLA takes a multidisciplinary approach to AFM, bringing together experts from Infectious Diseases, Neurology, Rehabilitation Medicine, Pulmonology, Surgery and more. Though there is no effective medical treatment for the disorder yet, CHLA plastic surgeon Mitchel Seruya, MD, has developed a workaround, refining a novel nerve-transfer surgery—borrowing nerves from the ribs and diaphragm in a kind of “electrical bypass”—to replace the deadened nerves in the affected extremity. CHLA is the only place in the western U.S. to offer this surgery for AFM.

“Too often these kids and their families are being told that nothing can be done about AFM except give it more time,” says Seruya, director of CHLA’s Brachial Plexus and Peripheral Nerve Center in the Division of Plastic and Maxillofacial Surgery, and assistant professor of Clinical Surgery at the Keck School of Medicine of the University of Southern California (USC). “We are a flagship for this type of management for AFM.”

But before Seruya and Maipele would meet, Maipele’s parents began an odyssey in summer 2016 to discover what was wrong with their youngest daughter. Her illness struck at a busy time for the young family. Carlene was eight months pregnant with their third child, while Bernard, Petty Officer - First Class, at the Naval Base Ventura County Air Operations at Point Mugu, was in advanced training. An air traffic controller, he is also assistant radar branch chief.

The worried parents returned to the local emergency room, where doctors diagnosed a dislocated shoulder, which can cause limb weakness. Next, the family saw their pediatrician, who started Maipele on a course of physical therapy.

By mid-June, with Maipele no better, their pediatrician referred the family to Children’s Hospital Los Angeles.

By then, Carlene had given birth to their son, Elijah. She stayed home to care for him and their oldest daughter, Rochelle, then 7, while Bernard and Maipele made the hour-and-a-half trip from Camarillo to CHLA. Finally, the mystery had a name—acute flaccid myelitis. It hit hard. “We had so many questions,” says Carlene.

AFM, marked by sudden onset of limb weakness or paralysis, first appeared on the national radar when 120 cases were reported the summer and fall of 2014. Two years later, in 2016, 149 people were confirmed with the disease. In the off years of 2015 and 2017, cases went down. So far, no one—not scientists, not clinicians, not the Centers for Disease Control and Prevention (CDC)—understands why.

The prime suspect is a viral infection, as a number of viruses can cause AFM symptoms. The CDC reports that the 2014 emergence of AFM coincided with a nationwide outbreak of enterovirus D68 (EV-D68), associated with severe respiratory illness.

Now officials are concerned that if AFM’s two-year cycle holds true, the number of cases may rise again in 2018. The illness primarily affects children.

CHLA neurologist Wendy Mitchell, MD, cautions parents to keep in mind that AFM is extremely rare. “Fewer than one in 1 million people are affected,” she notes. But it is something to be aware of, she adds, “especially since we don’t yet know why it seems to increase every two years.”

AFM targets the gray matter of the spinal cord, Mitchell explains, “where motor neurons reside, and so it affects movement and muscle control.”

If children haven’t recovered within three months after diagnosis, they typically face persistent paralysis, says Seruya. Doctors have yet to identify any factors that point to one child having a better recovery than another. “It’s a tough thing for families,” he adds, “because we have so few answers.”

Since 2014, Seruya has consulted on 16 cases of AFM at CHLA, and operated on eight—three children with total paralysis who went through a two-stage surgery, and five with partial paralysis of the hand, elbow or shoulder who underwent one surgery. The children ranged in age from 3 to 8 years old. In all cases, the procedure succeeded in restoring some functionality to weakened limbs.

After Mitchell and the Neurology team at CHLA confirmed Maipele’s diagnosis, they prescribed a steroid medication that has been effective on other types of myelitis (inflammation of the spine). Maipele embarked on a program of physical therapy at home in Ventura County and at CHLA.

She made progress in adapting to the use of one arm and learning how to rely on her left hand. But she still couldn’t lift her right arm or hold anything in her palm. Off balance, she even broke the arm in a fall at home.

Deciding on the next step

In April 2017, Maipele’s parents met with Seruya, who guided them through the surgery. In the first stage, he would take six nerves from Maipele’s ribs, transferring three to her arm to enable her to flex her elbow and three to flex her wrist and fingers. “With total paralysis, there are no other available donor nerves in the arm, as all are turned off,” he says. “So we must go elsewhere—in this case the breathing nerves.”

Because Maipele’s arm was totally paralyzed, she would need a second surgery to transfer one of two phrenic nerves from her diaphragm. That would enable her to extend her arm to the side.

Her parents were concerned about Maipele’s asthma. Would the removal of one phrenic nerve affect her breathing? The nerves originate in the neck and pass through the heart and lungs to the diaphragm. Seruya assured them that all previous AFM surgery patients had not shown any signs of compromised breathing or endurance.

“It was a lot to take in,” recalls Carlene. After some thought, they opted for the surgery. “We decided we wanted to give her the opportunity to experience a life with all her extremities,” says Bernard.

Ideally, Seruya prefers to complete the nerve transfer within 12 months of an AFM diagnosis to give the child a better chance at recovery. “The earlier you act, the better,” he says. Maipele made it just under that deadline—11 months. In the early hours of May 2, 2017, she was wheeled into surgery. The procedure took about nine hours. Maipele went home with a soft cast and a sling on her right arm.

On Aug. 10, 2017, CHLA surgeon Cathy Shin, MD, FCS, FAAP, harvested the phrenic nerve from the right side of Maipele’s diaphragm. Then Seruya took over, transferring that nerve to her arm.

Because her breathing nerves would now do the job of movement, Maipele would need to learn how to deploy them. Working with CHLA physical and occupational therapists, she practiced coughing to activate the flexing nerves and exhaling a sharp breath to extend her arm. “All of this tells her brain that her arm is still there,” says her mother.

Through October and November, CHLA doctors and Maipele’s parents saw signs of progress. She could rotate her shoulder and flex her elbow partway. By late December, 3 1/2-year-old Maipele could bend her elbow all the way (“as if she’s doing a bicep curl,” says her dad), open and close her fingers and even grip toys. She’s now also able to put her clothes on by herself—very important for a toddler who loves playing dress-up.

The grip strength in Maipele’s right hand will always be less than it is in her left. But Seruya expects the next year or two to bring continued improvement. “In a word, she’s resilient,” says her father.

Maipele’s progress is being followed by the Brachial Plexus and Peripheral Nerve Center, and she continues to see CHLA physical and occupational therapists, along with other team members in Neurology, Pulmonology and Orthopaedics.

“There aren’t enough ‘thank yous’ for everything everyone at CHLA has done for us,” says Carlene. “We are very grateful.”

“We’re excited to see what the future holds for Maipele,” says Bernard, adding that they hope to be a resource for other families who face a diagnosis of AFM.

No one knows for certain if AFM cases will increase again this summer. Most symptoms of enterovirus D68, thought to be one link behind AFM, resolve without the need for medical care. The best course of action: Be alert for viral infections this summer and fall. Follow all recommended hygiene practices, such as handwashing protocols and cough etiquette.

If a child has symptoms of respiratory or gastrointestinal illness, followed by sudden weakness or decreased movement in one or more extremities, visit an emergency room or see your doctor immediately.