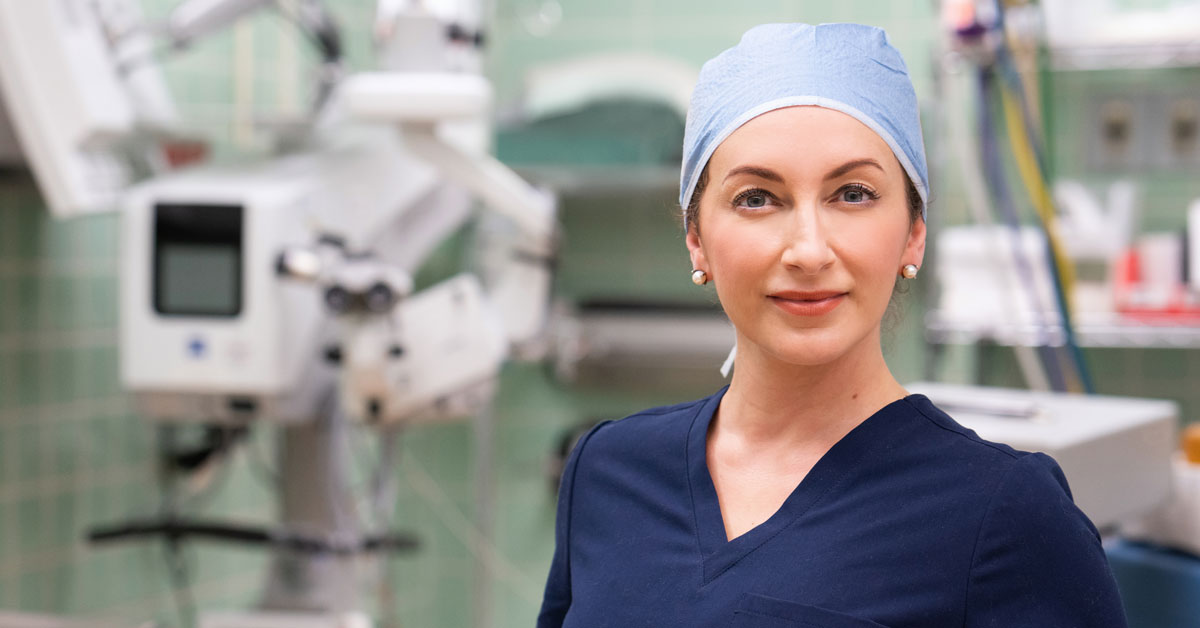 Tenacious, caring and passionate about better ways to treat retinoblastoma, Dr. Jesse Berry is leading change in the diagnosis and treatment of this rare cancer.

When meeting Jesse Berry, MD, her signature cascade of curly hair and genuine smile make an immediate impression. It makes sense; we are visual creatures after all. As an ophthalmologist, Dr. Berry would concur. What may not be as obvious at first sight is that Dr. Berry is a leader in the field of pediatric ophthalmology who has made a game-changing discovery in the diagnosis of retinoblastoma, an eye cancer that usually occurs in children under 5 and can cause blindness.

As a clinician and researcher in The Vision Center at Children’s Hospital Los Angeles, Dr. Berry’s work is transforming the lives of children in her care and around the nation who have retinoblastoma. But when asked about how she achieved all this, she reveals surprise at her own success.

“I should not have made it here,” says Dr. Berry, whose soft Midwestern accent provides the only hint that she’s not from around these parts. The Wisconsin transplant explains that she was raised by her grandmother and spent her childhood bouncing from home to home, school to school.

“We were focused on survival, not ‘extra’ things,” says Dr. Berry. By “extra,” she means things like planning for her future. Nowhere in their dialogue, she says, was there room for discussions of college, much less Harvard.

Dr. Berry realized “by chance,” as she puts it, that she was good in school. Amidst her life of instability, she found steadiness in academics and the positive feedback she received from her teachers.

Beyond her interest in book learning, Dr. Berry was adept at taking life lessons and translating them into moments of guidance. In all the memories she shares about her path to becoming a pediatric ophthalmologist, a clear thread is visible. She points to examples in her life that helped her understand what it meant to be a physician.

There was a local dentist who took care of Dr. Berry’s teeth when her family didn’t always have the resources. “He made such an impact on me in my life,” she says. “I don’t think I had really understood what being a doctor meant before then. He taught me what it means to care for a patient—that it can change that patient’s life.”

This inspiration, paired with academic excellence and a drive to do good, made Dr. Berry an unstoppable force—then and now. She decided to become a physician so that she, too, could impact people’s lives.

Dr. Berry smiles when she tells the tale of waiting for the right sized envelope in the mail, the story that college hopefuls know well. The skinny envelope holds a rejection, the fat envelope offers admission. One day after school, there it was: the fat envelope from her dream school.

She says Harvard took a chance on her, a girl from a high school that had never sent anyone to Harvard before, a girl who was the first in her family to attend college. Others might say that Harvard scooped her up before the other institutions got the chance—that Harvard saw the passion and the fight that has made her so successful today.

Speaking of fight, it’s not a bad time to mention how she was told not to wear pink to her Harvard Medical school interview. She says it felt a bit like pretending not to be a woman for the sake of getting accepted. “I was stubborn,” she says. You can guess what color her blouse was.

After medical school, Dr. Berry decided she’d go into ophthalmology. “The surgeries are delicate and they’re really beautiful,” she says.

This led to another point of serendipity. “On my first day of internship, my mentor diagnosed a child with retinoblastoma, when it seemed like no one else could figure out what was wrong,” says Dr. Berry. “I’ll never forget watching him build trust and connect with that family. I said to myself, ‘this is the type of doctor I want to be.’”

These moments of clarity and inspiration loom large in Dr. Berry’s mind. She is determined to do right by the people who encouraged her and to make good on these “chances” taken on her. And making good is an understatement.

Beyond the numerous awards and grants she has received, Dr. Berry’s work in retinoblastoma is changing lives and leading the field. The disease affects the back layer of the eye and has previously been impossible to biopsy, which made the study and diagnosis of retinoblastoma extremely difficult—until now. Dr. Berry had the idea to biopsy the aqueous humor (the fluid inside the eye). Her work showed that genetic information from the tumor can be found using this method. Not only does aqueous humor biopsy have the potential to allow clinicians to diagnose a patient more quickly and accurately, but it will also contribute to the study of disease. Her work will impact children and clinicians worldwide.

Beyond discovery, Dr. Berry brings her compassion to the clinic. “Because of my journey, I’ve always been an empathetic doctor,” she says, “but becoming a mother has given me that extra 10%. I can relate to how it feels to hand your baby to someone, so I’ve become more attuned to building that relationship and that trust with a family.”

Through her own personal blog, Dr. Berry strives to inspire others, particularly doctors and mothers. She believes women can and should do whatever it is they desire, not what others tell them they should do.

“Women cannot do it all at once,” she says. “But they can do it all. You can wear pink. You can be a mom. And you can be a badass surgeon.”

Her blog features topics as varied as the science of retinoblastoma and getting rid of pre-baby clothes that no longer fit. But she also speaks deep personal truths in an authentic voice:

Dr. Berry is one to watch. More than inspiring the world, she is changing it for the better.