A transformative $25 million gift from the Margie and Robert E. Petersen Foundation will carry on the couple’s lifelong legacy of philanthropic support.

Growing up, Robert E. Petersen learned a principle from his father that he never forgot. “If he found a $1 bill in the morning, [my dad] would spend the rest of the day trying to find the person who lost it,” Robert told the Los Angeles Times in 1995.

That spirit of generosity made an impression on the young man, and giving back became a key focus in Robert’s life. Together, he and his wife, Margie, provided extraordinary support to their community—including Children’s Hospital Los Angeles.

“This endowment provides an enduring investment in the health of the infants, children and youth that our institution serves,” says Paul S. Viviano, President and CEO of Children’s Hospital Los Angeles. “I am extremely grateful for this gift and for the Petersen Foundation’s incredible vision, leadership and dedication to helping all children reach their full potential.”

In recognition of this transformative gift, the main entryway at the hospital’s Sunset campus has been named the Margie and Robert E. Petersen Entry Plaza. The location honors the Petersens’ iconic place in automotive history: Robert launched Hot Rod and Motor Trend magazines. He and Margie are also the founding benefactors of the Petersen Automotive Museum in Los Angeles.

Robert’s love of cars started from a young age. Fittingly, he spent much of his childhood on the road.

Born in East Los Angeles in 1926, he was 10 years old when his mother died of tuberculosis. His father, a Danish immigrant, was a mechanic and taught him how to work on cars. Robert moved from town to town with his dad, who worked for Los Angeles Department of Water and Power crews that were building power lines across the Southern California desert.

In his teens, Robert worked as a messenger for MGM Studios in Los Angeles, then served in the Army Air Corps in World War II. In 1948, he borrowed $400 from a friend to launch Hot Rod magazine. It was a life-changing move.

“They would be happy to know that this gift will help children from all walks of life receive the lifesaving care they need.”

Robert met Margie McNally, a model and actress from New York, in 1962. Margie had traveled around the world working on campaigns for such companies as Coca-Cola and Ivory Soap. Robert proposed on their first date, and they married in 1963.

Margie became an integral part of Petersen Publishing. She served as Vice President, consulted on Teen magazine, created an in-house interior design firm, co-produced numerous automobile shows and ran the company’s restaurant, Scandia, during the 1980s. Margie later served on the Board of Directors for the Petersen Automotive Museum.

The couple had two sons, but in 1975, tragedy struck. Both boys—Bobby, 10, and Richie, 9—were killed in a plane crash. Twenty years later, Robert told the Los Angeles Times that the loss was something he and Margie would never get over.

Close to their hearts

Throughout their lives, the Petersens gave tirelessly to support the Southern California community they adored, including gifts to the Petersen Museum, The Music Center, the Los Angeles County Museum of Art and more.

One of the causes closest to their hearts was helping children. The couple were longtime supporters of Children’s Hospital Los Angeles, and Margie served as a member of the CHLA Board of Trustees for a decade beginning in the mid-1990s. Robert passed away in 2007 at age 80; Margie died in 2011 at age 76.

Over the years, the Petersen Foundation, led by President GiGi Carleton, has been a steadfast supporter of CHLA. Its contributions include an $8.5 million gift to open a state-of-the-art inpatient rehabilitation space in 2015—the Margie and Robert E. Petersen Foundation Rehabilitation Center honoring Bobby and Richie Petersen—and a $2.5 million gift that same year for The Vision Center.

“I am extremely grateful for this gift and for the Petersen Foundation’s incredible vision, leadership and dedication to helping all children reach their full potential.”

The foundation’s latest gift will support clinical care, research and education in The Vision Center, the Cancer and Blood Disease Institute and Inpatient Rehabilitation.

Research from The Vision Center has resulted in landmark discoveries and breakthrough treatments in everything from correcting eye alignment to treating eye cancer. Similarly, advances pioneered at the Cancer and Blood Disease Institute have led to dramatic improvements in survival rates and quality of life for children.

“Through their transformative philanthropy and leadership, the Petersens dedicated their lives to helping children overcome obstacles of all kinds,” says Alexandra Carter, Senior Vice President and Chief Development Officer at CHLA. “They would be so proud to know that this gift is supporting one of the nation’s top children’s hospitals in providing families and patients with the multidisciplinary family-centered care they need.”

Children’s Hospital Los Angeles treats the most vulnerable members of the community, including those covered by Medi-Cal (California’s Medicaid program). Many of the vital services CHLA provides are not fully reimbursed by government or private insurance—and are made possible only by philanthropy.

“Mr. and Mrs. Petersen believed strongly in the hospital’s mission to create hope and build healthier futures for children, and they were particularly moved by the hospital’s commitment to treating underserved children,” Carleton says. “They would be happy to know that this gift will help children from all walks of life receive the lifesaving care they need.” 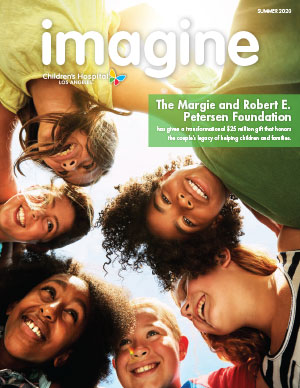