Published on
May 9, 2011
Categories:
Hospital News

The NHB will be known as the Marion and John E. Anderson Pavilion when the hospital begins to treat patients in the state-of-the-art facility July 10.

“We feel so fortunate to be able to make this gift to the children of Southern California and beyond,” says Marion, co-chair of the Board of Trustees and of Living Proof: the Campaign for Children’s Hospital Los Angeles. “Children’s Hospital Los Angeles saves lives and offers hope to tens of thousands of children and families each year. This gift is our way of saying thank you to everyone at the hospital.

“Their work is amazing and John and I can’t think of a more deserving institution.”

Pettker presented Marion with a crystal butterfly, signifying the transformative gift that she and her husband have made to the hospital. Patients who appeared on the hit television show “Glee” performed for Marion as well. 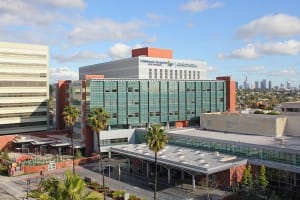 For 22 years, the Andersons have tirelessly devoted themselves to making Children’s Hospital Los Angeles the best children’s hospital in the western United States. Marion has served on the hospital’s Board of Trustees since 1989.

Under her leadership, the Living Proof Campaign raised more than $1 billion – making it the most successful fundraising effort in hospital history, as well as the only single fundraising campaign by a freestanding independent children’s hospital to raise as much.

“We are thrilled beyond words by Marion and John’s gift,” Cordova says. “It’s the latest in a long line of generous support from these two leaders of the Los Angeles philanthropic community.”