From Clinic to Glee. A Physician Consults on Upcoming Episode

Published on
October 29, 2012
Categories:
Hospital News, For Physicians and Clinicians 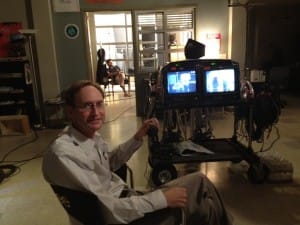 Douglas Vanderbilt, MD, recently consulted for an episode of Glee that is expected to air November 29.

Vanderbilt, who works in the Boone Fetter Clinic, first met with the show's writer and director, Ian Brannen, who was creating a scene in which actor Blake Jenner, who plays Ryder, undergoes a series of tests to determine if he has dyslexia.

"I helped on the representation of a dyslexia and academic achievement evaluation and explained how they could depict and dramatize it," Vanderbilt says. On the night of the shoot—which took six hours to set up, rehearse and film—Vanderbilt worked with Brannen and props master Paul Breuninger, explaining how to set up the flash cards and the test.

"A student with dyslexia can become ambivalent about school and get depressed or aggressive if he can't overcome learning problems," says Vanderbilt. "At the Boone Fetter Clinic, we can diagnose and advocate for children who need services at school. We can help teachers and families determine what needs to be done for the child."

On the Glee set, Vanderbilt got to step away from his physician role for a night, and enjoy the TV shoot as a fan. He got to meet both Jenner and star Cory Monteith, who plays Finn Hudson on the show. He also caught a glimpse of actress Sarah Jessica Parker, who was working on another Glee scene in another part of the lot. "It's amazing how many times they do the scene from different angles," he says. "And it's slightly different each time."