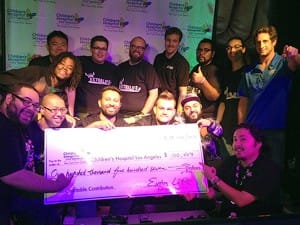 Extra Life has 36 North American guilds helping to fundraise for local children’s hospitals. According to Extra Life’s website, Extra Life raised over $2 million for the Children’s Miracle Network. In just last year alone, the Extra Life’s Los Angeles guild raised nearly $80,000 for CHLA. This year, with close to 1,000 supporters on their side, they surpassed their goal by over $400.

Participating in the event was former CHLA patient Alan Alvarado whose presence provided extra fuel in helping participants push through the 23rd hour. “People know how to play games, people love to play games; and, speaking from personal experience, kids at CHLA are no different,” said Alan. “It's a brilliant concept to take something we all love and turn it into a positive force.”