ENJOY LIFE! The patient behind the message 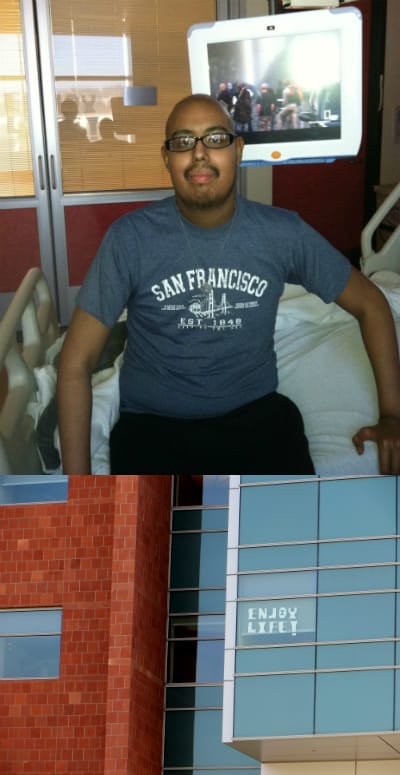 Joaquin Quiñonez Jr. didn’t know that he’d become “famous” on the Children’s Hospital Los Angeles Facebook page. And he really didn’t know the impact his little message was having. But when he pasted the phrase “ENJOY LIFE!” in 2-foot-tall letters on his window facing Sunset Boulevard, people started to notice.

The hospital’s photo of his then-anonymous message garnered more than 500 likes and 20 shares on Facebook.com/ChildrensLA, and 64 likes on the hospital’s Instagram presence, ChildrensLA. And it generated countless conversations at the busy intersection of Sunset Boulevard and Rodney Avenue, where employees and patient families wait to cross the street, heading toward one of the top five children’s hospitals in the entire country.

“People spend their life doing the same thing over and over,” says Quiñonez. “You never know when you might be gone.” The 19 year old has thought about this a little more than most young men his age. Quiñonez was diagnosed with lymphoma in 2010 at age 17. He recovered, but the following year, the cancer came back, this time in his head. He had a successful bone marrow transplant in March 2012; and another one in December 2012 to improve the first transplant’s chances of success. He’s been in the hospital since November, and has had time to contemplate the things that people take for granted, while his life outside has been on hold.

Quiñonez is a drummer and guitar player—his favorite band is Pink Floyd, and he loves classic rock. He grew up in the Los Angeles area, and though he had to complete much of his senior year by home study, he was able to walk the stage and graduate with his class from Fairfax High School. He’d just started studying car technology at LA Valley College when he relapsed.

In addition to school and music, he has been learning how to cook, and he also wants to add the saxophone to the list of instruments he can play. His bandmates brought their instruments to the hospital and they rehearsed and wrote songs. And Quiñonez has a son—born two months before he was diagnosed with lymphoma. “They told me I can’t have any more kids, so I’m happy I have one,” he says. He didn’t see his little boy while he was in the hospital, but they were able to Skype and talk on the phone.

He was discharged in late February, after doctors were satisfied that the fluid around his heart was no longer a danger. Now he’s back home, doing the very thing he’s encouraging everyone else to do with his big block letters.