Please join us in congratulating Dylan Prunty, a six-year-old patient, on being our first in-house LEGO Master Builder.

Dylan proudly displays a certificate because it was sent to him by fellow LEGO Master Builders and the company’s President. His Certificate of Achievement reads,  “You go beyond a LEGO enthusiast; you are truly a LEGO Master Builder!” After gaining so much in-house support from hospital staff who were overjoyed to see Dylan find such happiness during his recovery, ABC7 in Los Angeles decided to air his story on the news. After that, the fan mails started with numerous letters, LEGO donations and much more. 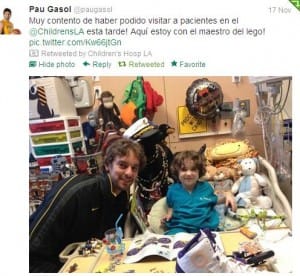 When asked how long it took him to build a full-size semi truck with a motor and crane, he says “About four hours, but that’s because the nurse kept coming in to check up on me.” (He would have had it done sooner!)

He has other special guests checking in on him too, like Los Angeles Lakers player, Pau Gasol!

Pau made a special visit to Dylan’s room at Children’s Hospital Los Angeles and attempted to help build one of his many projects. Dylan is very particular of every single placement, so he remained in complete control of each piece. Pau presented Dylan with a size 17  autographed shoe and was surprised by just how large his foot was. “WOW! This is almost as big as me!” says Dylan.

Dylan made quite the impression with Pau as shared on his Twitter page.

Dylan was diagnosed with a complex form of mitochondrial disease that requires the care of several pediatric specialists in areas such as Endocrinology, Nephrology, Gastroenterology and more.  He has undergone a series of blood transfusions and other treatments, but nothing tears him away from his LEGOs for long.