Twins of the Year

Published on
April 16, 2015
Categories:
Hospital News
For the last four years, the Hemostasis and Thrombosis Center (HTC) at Children’s Hospital Los Angeles has been traveling to Arequipa, Peru to help improve the state of hemophilia care through a World Federation of Hemophilia (WFH) project: The Twinning Program. Just recently, the WFH acknowledged the team for their outstanding work and partnership in Arequipa by awarding them as Twins of the Year. Children’s Hospital Los Angeles sat down with Guy Young, MD, director of the Hemostasis and Thrombosis Center, to ask him what this award means to the HTC team and why it was important to be apart of this program.

First off, congratulations on your achievement! But for those who have never encountered hemophilia, let’s explain what it is.

Guy Young, MD: Hemophilia is a chronic bleeding disorder. When people with the genetic condition are cut or injured, their bodies lack the ability to stop the bleeding. Bleeding can occur in any area of the body, including a child’s joints and muscles. Bleeds can also cause complications like chronic joint damage and arthritis. These complications become heightened in countries with fewer resources. 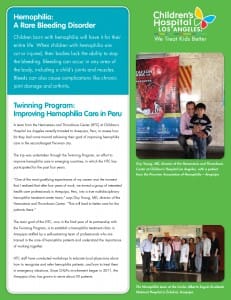 What is CHLA doing to help hemophilia around the world?

GY: Since these complications often become heightened in countries with fewer resources, our team has spent the last four years improving hemophilia care at a center in Arequipa, Peru through the Twinning Program.

What is the Twinning Program?

GY: Created by the World Federation of Hemophilia, the Twinning Program connects treatment centers in developing countries with established treatment centers to improve hemophilia care in emerging countries. Over the last four years, partnered centers have shared their expertise, skills and resources.

What was the main goal HTC wanted to achieve in Arequipa?

GY: The main goal was to establish a hemophilia treatment clinic in Arequipa that would be staffed by a self-sustaining team of professionals trained to care for hemophilia patients and understand the importance of working together. Our team conducted workshops to educate local physicians about how to recognize and refer hemophilia patients, and how to treat them in emergency situations. Since we got involved 2011, the Arequipa clinic has grown to serve about 50 patients. On our final trip last October, we conducted a one-day symposium and workshop—launching Peru’s first-ever hemophilia camp.

Why is Twinning so important?

GY: As one of the top Hemophilia Treatment Centers in the United States, I believe we have an obligation to share our knowledge and expertise with other institutions that care for hemophilia patients, and especially those in the developing world where hemophilia care lags far behind what patients get here in Los Angeles.

What did your team get out of participating in the Twinning Program?

GY: The major thing we got out of participating was gratification. When we started, there was no hemophilia center or team caring for these patients and it was clear that the patients suffered as a result. I realized that after four years of work, we turned a group of interested health care professionals in Arequipa, Peru, into a true multidisciplinary hemophilia treatment center team. There is now a hemophilia treatment center and the patients are able to receive a very high-level of care not dissimilar from what we are doing here. It gives us great pride to know that through our efforts, patients in the Arequipa region of Peru will forever receive much better care thanks to our intervention. 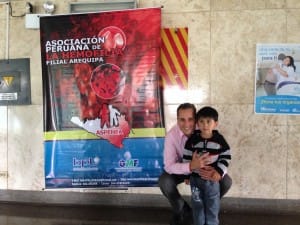 Are there any specific instances or personal stories during the experience that stand out?

GY: I recall meeting a patient early on—a one-year-old. He had yet to manifest any signs of hemophilia other than bruises, due to his age, and he was a perfect candidate to educate the team in Arequipa on how to best prevent the irreversible, crippling joint damage that occurs in untreated hemophilia. We taught the team about a treatment plan that will prevent the complications. The last time we saw him, he was five years old, had perfectly normal joints and could participate in all the activities of his peers. He was like a normal boy, except for the need for receiving his treatment. I know that through the TwinningPprogram, he will grow up to be a normal teenager and adult—just like our patients.